‘The Signal’: Neo experience for nerd trio in derivative but mysterious sci-fi offering 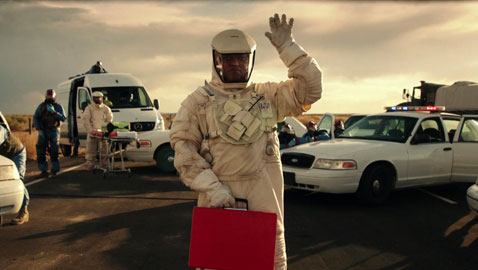 ‘The Signal’: Neo experience for nerd trio in derivative but mysterious sci-fi offering

Old bait-and-switch tactics, some solid acting and impressive technical craftsmanship – especially on a $3 million budget – define William Eubank’s sophomore effort. The eerie mystery-cum-sci-fi thriller “The Signal” begins promisingly too, but great assets don’t always play together well, and in this case the fantastic foreplay and moodiness just can’t carry through to the climax. 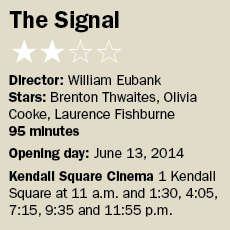 The hook has three computer nerds on a cross-country trip to take the lone female, Hayley (Olivia Cooke of “Bates Hotel”) to a California tech school. One of the guys, Nic (Brenton Thwaites, most recently in “Maleficent”) is her beau and on crutches, the result of some sort of poorly explained disease or condition. The relationship is strained, not only because of looming long distance and physical barriers but because Hayley is defecting from MIT, where Nic and Jonah (Beau Knapp) remain. The two lads are also engaged in a hacking war with an online entity known as Nomad. Nomad’s bona fide; he can hack into a security cam and send the trio a pic of their dusty station wagon as it heads through the plains, or take over one of their laptops. Finally, the two get a bead on Nomad somewhere in Nevada and they decide to take a detour. It’s also where the boldness of “The Signal” starts to fade.

Without trying to give away too much, I’ll just say Eubank starts to borrow heavily from “The Blair Witch Project,” “E.T.” and all things Area 51, let alone Kubrick. Some of the liftings are eye-roll worthy, but the actors stay on it and for a long time, despite all the uninspired developments, Eubank keeps the sharp edge of enigma at the viewer’s throat. It’s an odd mix, but ultimately a testament to Eubank’s knack for mood, intrigue and, with such a low-fi budget, amazing visuals.

In the middle of the mayhem after an otherworldly event at the “Blair” house where Nomad is allegedly holding out, “Matrix” and “Hannibal” denizen Laurence Fishburne shows up in a hazmat suit, breathing heavily and offering partial answers. If you’ve seen Josh Trank’s “Chronicle,” which too has a trio of YAs bump into alien life and have their own lives altered, you know where this is going. For those who haven’t, all I’ll say is: bionicle (or bio-mechanical) military lockdown. And suggest you catch the superior “Chronicle.”

In a twist, Nic finds his legs as Eubank loses his, cycling through one cinematic idiom after the next. Don’t fear for him, though. His eye is keen and his hand confident; he’ll get a big project soon enough. It may be just as clichéd and recycled, but it will be bow-wrapped and handed to him. Time will tell if his signal has broadcast sustainability.