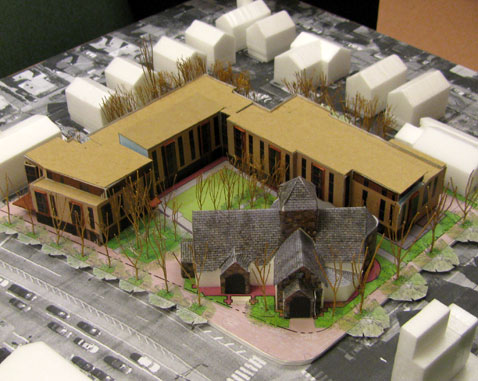 Residents hoping to stop a 48-unit condominium project around historic St. James’s Episcopal Church in Porter Square could hear at any moment from a judge in Massachusetts Superior Court – but they’re okay with the case dragging on.

The judge has deliberated about two months so far.

Waiting works to the residents’ advantage because time is money for Oaktree Development, and there might be a breaking point when Oaktree finds it no longer cost effective to wait on a project that’s already taken more than five years to get going, said David DeCelles, the lawyer representing 27 residents in a lawsuit filed in October against the company and St. James’s Episcopal Parish Of Cambridge.

According to the St. James’s annual report last year, Oaktree continues to pay the church $10,000 per month until the start of the construction, and the site is quiet and surrounded by sagging chain-link fence. 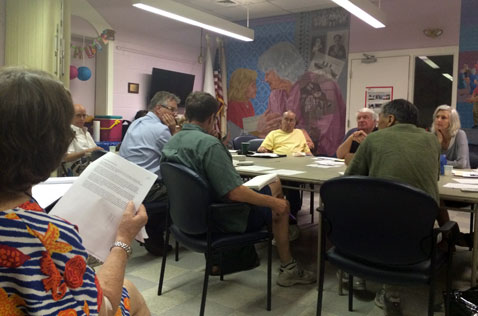 Jacqueline Kelley, a resident who has been working with DeCelles on the case, said at Wednesday’s meeting of the North Cambridge Stabilization Committee that the residents tried to negotiate with the developer before suing, but failed. “[They are] very arrogant. And we’ve been to the battle,” Kelley said.

Oaktree has a team of lawyers from Greenberg Traurig, an international law firm with an office in Boston. Oaktree Development could not be reached for comment.

The dispute between the developer, church and residents started in 2008, when Oaktree bought the site of a former car wash next to the church. It expanded its design onto church land in exchange for revenue St. James’s could use as an endowment to maintain its charitable missions and 1888 Richardsonian Romanesque structure. The design demands of Oaktree’s condos, garage and entranceway would contribute to the shrinking of Knights Garden, a courtyard designed in 1915 by famed architect John Nolen to which the public is promised access.

The current lawsuit is “to protect the landmarked and preservation-restricted church garden from the environmental destruction threatened” by the condo plan, said Michael Brandon, clerk of the committee.

Residents also worry about damage to the historic church by the condominium project, but according to DeCelles’ presentation, the greatest criticism is the approximately additional 100 cars expected to rely on Beech Street, which suffers already from heavy traffic between Somerville’s Davis Square and Massachusetts Avenue in Cambridge. Brandon said a developers’ study certified by the city’s traffic director estimates the project would generate some 186 daily vehicle trips.

This is not the first lawsuit brought by the residents. According to Brandon, in May 2011 John Armstrong, his wife Patricia and four other neighbors appealed the special permit granted by the Planning Board by suing the board, Oaktree Development and St, James’s in Middlesex Superior Court. The plaintiffs dropped the case before a trial that would have involved significant litigation expenses. Armstrong said in a telephone interview that he and his wife spent about $20,000 on the case – a gift to the neighborhood they could no longer afford.

That June, Jacqueline Kelley and David Vogel sued the Cambridge Historical Commission, Massachusetts Historical Commission, Oaktree and the Episcopal Diocese of Massachusetts, challenging the project approvals granted by the commissions. The judge dismissed that case before trial on a motion by the defendants. The plaintiffs appealed, but a panel of the Massachusetts Court of Appeals upheld the lower court’s ruling in August, again dismissing the case. The residents “lacked standing” to challenge the commissions because they were not abutters to the church site, according to public records. The court also noted that an environmental protection suit might instead have been brought by at least 10 residents.

On the October case, “the judge hasn’t ruled yet, and there’s no time requirement on her,” DeCelles said. “So the decision can be made any time.”

This post was updated Aug. 12, 2014, to correct the number of units and plaintiffs and spelling of DeCelles’ name, clarify that the church is considered Richardsonian Romanesque architecture and add Brandon’s reference to a study showing 186 daily vehicle trips.