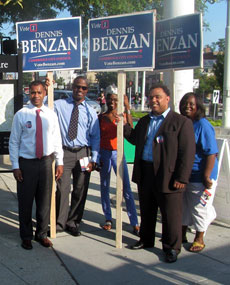 Dennis Benzan, left, made a job fair such as the one taking place Wednesday a centerpiece of his run for City Council. (Photo: Benzan campaign)

More than 30 businesses and institutions are setting up shop Wednesday for a giant, free Cantabrigians-only Career Expo inspired by vice mayor Dennis Benzan.

Between 500 and 700 residents are expected to attend the three-hour event starting at 10 a.m., city officials said. Information about the event and job fair tips are here.

Benzan has been pushing hard for a job fair as a way to connect the city’s unemployed or low-income residents with higher-paying possibilities at the employers that have made Cambridge a destination for a range of innovation technologies – not just in his March 24 order requesting a fair, but as a campaign promise before he was elected.

Along with science-oriented education, it’s key to keeping middle-class and working-class families in Cambridge alongside the workers who move in, renting or buying real estate with their high salaries, he said.

“I want to build better, stronger partnerships between our corporate and residential communities. We need to encourage corporations to view our neighborhoods as their first, best partners, and in turn we must educate all our citizens, young and old alike, to imagine companies such as Novartis, Microsoft and Google as places where they might have successful careers – not just as buildings in whose shadow they walk,” Benzan said in August 2013, saying further:

A citywide job fair is much needed to bring employers and job-seekers together … A citywide fair would provide an excellent opportunity for corporate human resource departments to become acquainted with the tremendous talent we have in Cambridge. The fair would help to transition graduating students to their first professional career opportunity as well as assist seasoned professionals secure new jobs. Whether your plan is to pursue a graduate degree or find a meaningful internship, this job and career fair will grant Cambridge residents the opportunity to advance in their professional goals.

A half-year after his policy order, the city is co-sponsoring that fair through its Community Development Department and Office of Workforce Development, with the Cambridge IBM Innovation Center playing host.

Benzan wanted even more businesses involved, though, and asked the organizers Sept. 29 how to make the job fair next year – and heard that, considering some businesses may have opted out because they simply have no open positions, “the best thing is to have a successful career expo. If this one is as successful as we think it will be, it will be better next year.”

City Manager Richard C. Rossi said staff would follow up with participating businesses with the goal of enlarging and improving the next city expo.