Klezmer Music Festival: ‘Circus of sound’ joins ‘whirlwind of a band’ at Regattabar 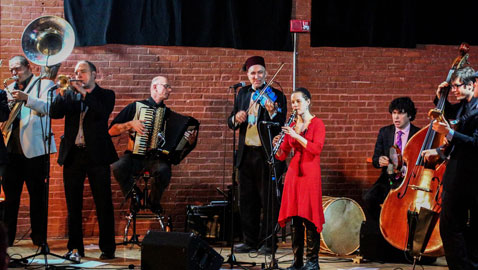 Klezmer Music Festival: ‘Circus of sound’ joins ‘whirlwind of a band’ at Regattabar

Regattabar’s second annual Klezmer Music Festival would be considered modest – it’s only two bands – if the two bands weren’t so big on their own. And not just in size, although the bands have 10 and six members respectively. Each of the bands are as clamorous and expansive as any in the wide-ranging world music category.

The 10-member Klezwoods is called “an amalgam of strings, horns and percussion that melds the spirit of traditional klezmer and Balkan music with modern grooves, improvisation and East Coast attitude.” The Boston band is prepping its third album of all-original music for early 2015 focusing on traditional Klezmer, Balkan and Arabic sounds, but it doesn’t hew too close to those traditions. Boston Metro called Klezwoods “an utterly unique circus of sound.”

Six-member Klezperanto is an all-star lineup of Boston musicians led by clarinetist Ilene Stahl that “delivers spectacular technical virtuosity and a wry sense of humor” in its so-far 15-year mission to “re-groove traditional klezmer and Mediterranean melodies, rip up Romanian surf tunes, cover cop show themes and cumbias, slay a few standards and burnish it all to a funky finish.” The Boston Globe has called it a “whirlwind of a band, which turns klezmer, zydeco, rockabilly and various other ethnic sounds into a dance mix so potent it should carry a warning label.”