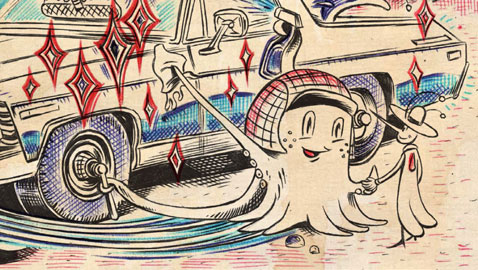 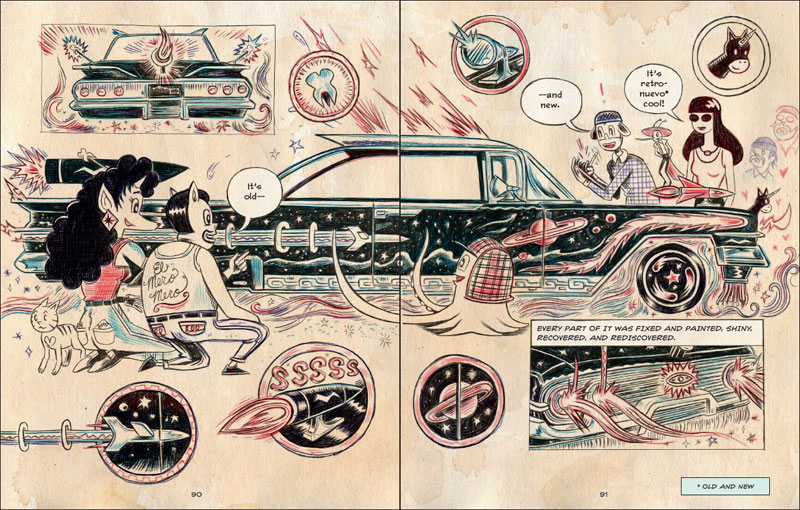 There’s much to love about the graphic novel “Lowriders in Space,” starting with a lo-fi, retro aesthetic – purposely aged pages and art reminiscent of ballpoint-and-Sharpie doodles – and loopy, imaginative narrative that takes its heroes from a junkyard into the stars.

Gonzalez’s comic and fine art has been exhibited widely in the area (a range represented by shows at the Aidekman Gallery at Tufts University and an ongoing residence for the sharp-eyed at Diesel Cafe), and he’s taught at the Institute of Contemporary Art and Museum of Fine Arts as well as at the Maud Morgan Arts Center in Cambridge’s Agassiz neighborhood.

Since Camper and Gonzalez – a new parent – educate as well as create, “Lowriders” is careful to explain its science terms and, for kids who aren’t bilingual, to footnote the Spanish words and slang found throughout.

Here’s the blurb explaining the book on the bookstore website:

Lupe Impala, El Chavo Flapjack and Elirio Malaria love working with cars. You name it, they can fix it. But the team’s favorite cars of all are lowriders – cars that hip and hop, dip and drop, go low and slow, bajito y suavecito. The stars align when a contest for the best car around offers a prize of a trunkful of cash – just what the team needs to open their own shop! ¡Ay chihuahua! What will it take to transform a junker into the best car in the universe? … This delightful book will educate and entertain in equal measure.

In addition to crediting the idea of the graphic novel to being “a prolific daydreamer,” Camper said in an interview with the Book Doctors publishing consultants that “I also noted as a librarian that books on lowriders were super popular, but we only had three or four of them for kids, all nonfiction. I tried to find a book like mine, but when I saw it didn’t exist I thought, well, I’ll have to try to write it myself.”

When she contacted Gonzalez and sent a script, she said, he wrote back with this message: “This is the book I wanted to read as a kid.”

If you can’t make it to Gonzalez’s appearance Wednesday, the book can be found there later or at Somerville’s Comicazi, 407 Highland Ave., Davis Square, and Hub Comics, 19 Bow St., near Union Square; or at the Museum of Fine Arts in Boston. The hardcover edition is $22.99 and the paperback is $9.99.