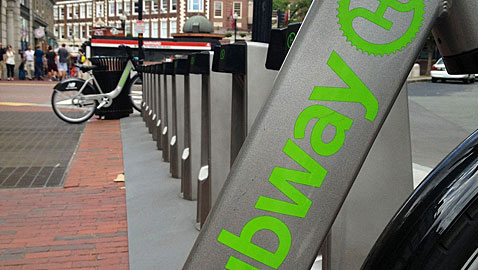 For the second year in a row, the Hubway bike rental system will stay available to riders throughout winter at almost all Cambridge stations. Last year, the city piloted year-round Hubway service, recording more than 35,000 rides from December through March despite the harsh winter.

“Cambridge broke new ground last year with our first-in-the-region winter operation of a bike share system,” City Manager Richard C. Rossi said in a press release. “We are pleased to be able to build on last year’s success by continuing to offer this sustainable transportation option throughout the coming winter season.”

Almost all stations in Cambridge will remain operational through the winter, though stations at Lafayette Square and Main Street and Dana Park will be removed from the street for the season to make way for snow plows. All station updates will be posted on the station map here, on the Hubway Tracker site and on the Spotcycle smartphone app. Annual members may continue to use the Cambridge stations during the season at no additional cost, and 24-hour, 72-hour and monthly passes will be available for purchase as usual.

While Hubway remaining open during winter months can be essential for riders, the number of rides the system saw last winter is low compared with warmer months, said Benjy Kantor, marketing manager for Hubway. The 35,000 is about what the entire system might see during a single warm summer week – although Cambridge’s stations represent only about 20 percent of the system anyway.

For the first time, a reduced number of stations in Boston – approximately 60 of them – will remain open through December, city officials said, but Hubway stations in Somerville will start closing in mid-November and be closed entirely as of Nov. 26. (Brookline stations follow a similar calendar.) The entire 140-station, 1,300-bike system is expected to re-open in March or early April, depending on the weather.

Somerville and Brookline “definitely are interested” in keeping stations open during the winter, Kantor said, “but there are different concerns for different municipalities. Costs are an issue.”

In addition, initial licensing was done for three seasons, and extending Hubway use beyond those nine months would call for renegotiated contracts in Somerville and Brookline, he said.

As was the case last year, snow removal at Cambridge stations will be part of the daily responsibilities of the Hubway field staff, in addition to the daily rebalancing of the system to meet demand cycles, Cambridge officials said.

Rossi had a final warning for users: During extreme inclement weather conditions, Hubway may close the system temporarily, with public announcements made via social media and the Hubway’s website. Station alerts will also be emailed to annual and monthly Hubway members, and all riders can consult the Spotcycle app to learn whether bicycles are available. In the event of a system closing, riders will be able to return bikes to all stations securely, but will not be able to check bikes out.