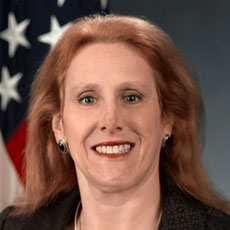 From The Lincoln Awards, Nov. 10: Jackie Garrick, a fellow at Harvard, is one of 10 first recipients of The Lincoln Awards. The two-day awards ceremony and concert, taking place in January, will be the first of its kind to recognize service to and by veterans and military families.

Garrick will get the Public Service Award for outstanding achievement and excellence in providing opportunities and support to veterans by a government employee. In addition to being a 2011 senior Harvard fellow, she is a social worker, U.S. Army veteran and policy analyst whose military and clinical experiences inspired a 28 -year career focused on educating and advocating for service members, veterans and their families and advancing treatments for post-traumatic stress disorder. She serves as director of the Defense Suicide Prevention Office.

She and nine others will be honored in Washington, D.C., on Jan. 6 by The Friars Foundation, the charitable arm of The Friars Club. The honors ceremony will be followed by an All-Star Concert at the John F. Kennedy Center for the Performing Arts Concert Hall on Jan. 7, which will be packaged for a national primetime broadcast to coincide with the 150th Anniversary of Abraham Lincoln’s landmark Second Inaugural Address on March 4. The concert will gather the entertainment community to celebrate our military, veterans, wounded warriors, caregivers and military families, while saluting the Lincoln Award Recipients.

In addition to Garrick, honorees include:

Bruce Springsteen, a strong supporter of veterans and the military family for decades, including  songs such as “The Long Walk Home,” “Lost in the Flood,” “Devils & Dust” and “The Wall.”

Dean Kamen, inventor of the Segway, who has revolutionized the world of prosthetics with his bionic arm invention.

Kayla Williams, a writer raising awareness for the betterment of her fellow veterans and civilians and working to bridge the civil-military divide. She has released two memoirs: “Love My Rifle More Than You: Young and Female in the U.S. Army” and “Plenty of Time When We Get Home: Love and Recovery in the Aftermath of War.”

Team Rubicon, which deploys veterans and first responders to disasters around the world, supporting not only local communities in their greatest times of need but also empowering veterans who are searching for a sense of purpose after their military experience.

Dick Young, 82, a retired rear admiral and active volunteer throughout his entire adult life. He served 35 years in the U.S. Navy, active and reserve, and was awarded the Legion of Merit Award three times, one of the highest peacetime awards a Navy Reservist can receive.

Justin Constantine, who, despite a gunshot wound to the head in Iraq, has made significant and outstanding contributions to veterans and wounded warriors through fundraising, leadership, advocacy for individual veterans in distress, community outreach, peer mentoring and pro-bono speaking and media appearances.

Britnee Kinard, who worked with the Department of Veterans Affairs for more than 15 months to get her husband’s service animal approved and founded the SD Gunner Fund in 2014 to assist veterans and disabled children with the financial expense of owning service animals. Kinard frequently speaks at schools and other community organizations to raise awareness about PTSD, service animals, and caregiver support and is a full-time caregiver for her husband, U.S. Army Purple Heart recipient Douglas H Kinard Jr.

Ken Fisher, chairman and chief executive of the Fisher House Foundation, which builds “comfort homes” for families of hospitalized military personnel and veterans.