‘The Better Angels’: Young Abe has mom, this film has Malick as their guiding lights 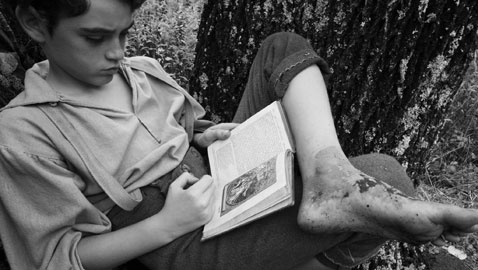 ‘The Better Angels’: Young Abe has mom, this film has Malick as their guiding lights

There’s little discussion as to what’s the emblematic cinematic portrait of a president as a young man. For the life of me, I can’t think of one resonating picture about George Washington and that famous cherry tree. When it comes to presidential hagiography, it’s ’ole Abe, reigning over the tumultuous time the country was nearly ripped in two, who gets the lion’s share of celluloid exposure – and rightfully so. John Ford’s “Young Mr. Lincoln” made in 1939 starred a fresh-faced Henry Fonda as the pre-White House incarnation of the stoic leader who would champion equality and lead the final charge to abolish slavery. Two years ago, Daniel Day-Lewis struck Oscar gold as the unwavering POTUS in Steven Spielberg’s “Lincoln,” though of course we can all forget about the silly, senseless “Abraham Lincoln: Vampire Hunter” as it fades into the late-night spin cycle on cable. 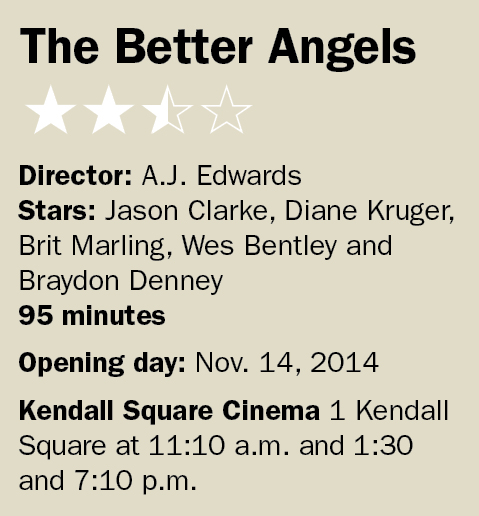 A.J. Edwards’ “The Better Angels” is another creature entirely. As certain as there’s black and white, it’s about the young Abe without ever really mentioning the lad’s name, and like Ford’s revered fictional exploration is shot in rich, monochrome hues – but that’s almost giving the similarities between the two films too much attention. It would be unfair to call “Better Angels” plotless. Though it unfurls in arcane wisps and ethereal shards, through careful guidance it paints a visceral and comprehensive collage. One might label it a historical record in dreams, something the trippy visualist Terrence Malick (”Days of Heaven” and “The Tree of Life”) made an art form. Interestingly enough, he’s one of the film’s producers, and Edwards served as his editor on the art-house auteur’s lone fruitless endeavor, “To the Wonder.”

“Better Angels” begins with a quick shot of the Lincoln Memorial in Washington, and with it we get a heavy, gruff Kentucky drawl from Lincoln’s last surviving cousin, Dennis Hanks (Cameron Mitchell Williams), who lived with the young Abe and his family for more than a decade after his own family perished. Then we’re in the bucolic woods circa 1817, when the Lincolns moved from Kentucky to Indiana, with tall trees sparse of leaf allowing in a generous potency of late autumn sun. The slow pontificating voiceovers and tight focus on nature’s quiet business unfurls like a black and white extract from Malick’s “New World” of 2005, which also grappled with the origins of the civilized states. The influences of the senior filmmaker are stark and undeniable.

The film’s overall binding theme, underlined by the title and Lincoln’s well-known snippet, “All that I am or hope to be, I owe to my angel mother,” places a square onus upon Abe’s mom (indie darling Brit Marling). She’s nearly angelic, giving and warm, uneducated and open and aware of the seeds of something more within her son. But with such build-up of the bond between mother and 10-year-old son, things suddenly go poof. Nancy Lincoln, as history has it, is poisoned by tainted cow’s milk and falls ill. After a nightmarish sequence worthy of “Jacob’s Ladder,” she departs. The film’s barely begun and the motif seems irreparably fractured – unless all the celestial hype is intended to be Nancy shining down on the young Abe?

Abe’s father, Tom (Jason Clarke, the blue-eyed torturer in “Zero Dark Thirty”), stern and focused, blows off back to Kentucky to garner a new wife (Diane Kruger), who in terms of Abe, fills the same role, wandering the woods, cooing to birds and attempting to answer questions about the universe and the nature of man. She too holds the boy with regard, but one of Abe’s new stepbrothers grumps, “He thinks he’s better than us.” The film hints at much debate over the merits of the young and taciturn Abe. One of his supporters, local schoolteacher Mr. Crawford (an astute, idealistic Wes Bentley), has a tense parent-teacher conference with an apathetic Tom while doing work in the cornfields. It’s clear that even pa senses it, but the odd little stumbling block within “Better Angels” is that all this praise of promise and prowess heaped upon tyro Abe comes foisted through narration and not felt through Edwards’ vignettes of vaporous prose and shadowy imagery.

Going one step further, the actor who plays the young icon of revered greatness (Braydon Denney) looks something like a CK model as he stands taut in his suspenders and ready to hold his own against a much bigger foe in a grapple. There’s no connection to the Lincoln that Day-Lewis rendered, or even Fonda. The breadcrumbs from here to there are gone, eaten by marauding crows. The one scene that connects us back to the man honored in stone on the Potomac comes when Abe goes on a walkabout of sorts, passes out at the base of a tree in the far woods and is awakened by a passing succession of shackled slaves. The low-angle cinematography by Matthew J. Lloyd sends it home poignantly, but given Lincoln’s monumental sacrifice and historical gains, such alluring devices from Malick’s arsenal feel twee and insincere, as if squeezing sustenance from a stone. The film’s end marries back to its start in historical context and relativity; and while the in-between lingers as a beguiling experience, the broader scope is curious without provoking curiosity.