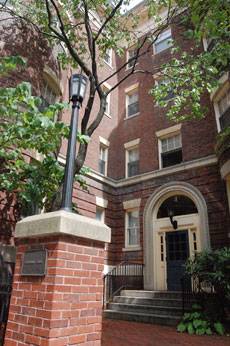 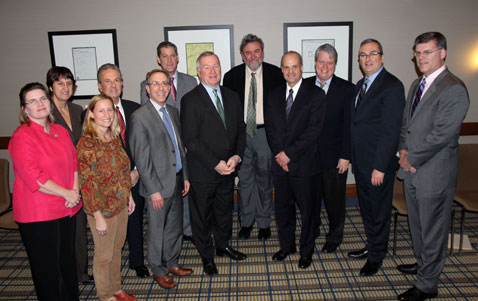 Officials from the City of Cambridge, Homeowners Rehab Inc. and Harvard University celebrate the final steps in the acquisition, preservation and renovation of 25 affordable-housing units in Harvard Square. (Photos: City of Cambridge)

From the City of Cambridge, Nov. 25: A little more than three years ago, tenants of Chapman Arms were unsure what the future of their homes would hold. But today at a special ceremony, the City of Cambridge, Homeowners Rehab Inc. and Harvard University celebrated the final steps in the acquisition, preservation and renovation of 25 affordable housing units in the heart of Harvard Square.

In 2011, HRI acquired the 50-unit Chapman Arms – with 25 affordable-housing units and 25 market-rate units, the first acquisition under the Commonwealth’s preservation statute, Chapter 40T. Harvard University, owner of the land under Chapman Arms, supported the acquisition and worked closely with the city and HRI so the building could be kept affordable for the long term.

The preservation of Chapman Arms is just one example of the success the city has had in preserving expiring-use housing in recent years. In 2009, an analysis by the city’s Community Development Department identified 10 properties containing 1,094 affordable units at risk of losing their affordability by 2021.  Since that time, through the efforts of the city, the Cambridge Housing Authority and other partners, more than 424 affordable units in seven properties have been preserved, ensuring these homes will remain affordable for future generations.

The 50-unit Chapman Arms in Harvard Square has 25 affordable-housing units and 25 market-rate units and is the first acquisition under the Commonwealth’s preservation statute, Chapter 40T.

“The preservation of Chapman Arms, keeping this affordable housing in Harvard Square, is a major accomplishment, City Manager Richard C. Rossi said. “It is a pleasure to celebrate this today with the tenants, HRI, Harvard and everyone who made this important achievement possible.”

Peter Daly, the executive director of Homeowner’s Rehab Inc., said, “We’re thankful to the City of Cambridge for showing continued leadership in affordable housing and for its commitment to meaningfully address the housing needs of low-income residents. We appreciate the support of Harvard, the funding commitments from all our public and private partners, and the cooperation of residents who worked with us to plan and undertake the needed renovations in the building.”

“Harvard understands that creating and preserving quality housing can support the economic well-being and diversity of our communities,” said Kevin Casey, associate vice president of public affairs and communications at Harvard University. “Harvard has been part of creating or preserving more than 600 units of affordable housing in recent history in Cambridge. Harvard continues to strive to be an effective partner with the City of Cambridge and the Commonwealth to address affordable housing and other important issues and we look forward to many more successes such as the one we celebrate today.”
“It is our privilege to partner with HRI and participate in the financing for such an important housing resource in Cambridge,” said Mark D. Thompson, chief executive and president of Boston Private Bank & Trust. “With few affordable alternatives, Chapman Arms presents a unique opportunity that we are proud to support.”

“Preservation has been our top priority in recent years, and thanks to the resources the Cambridge City Council has allocated to affordable housing, we have been very successful,” said Brian Murphy, assistant city manager for Community Development. “With preservation at seven properties completed in the last four years, and an eighth where affordability will be preserved next year, we are well along the way toward meeting our preservation goals and can now begin to look more aggressively for opportunities to expand the city’s stock of affordable housing.”

Cambridge produces affordable housing by using funding from the Community Preservation Act to leverage other public and private funds.  In the past five years, the city has used CPA funds to preserve or create more than 1,000 affordable units through preservation of existing housing, new construction conversion of nonresidential properties to affordable housing and by buying market-rate units.

Additionally, hundreds of inclusionary units for low- and moderate-income households have been created in private residential developments across the city. Cambridge’s inclusionary housing provisions are responsible for the creation of more than 800 units completed or now being built in the city. In the coming year, the city will explore revising its zoning ordinance to further support the expansion of affordable housing in the city through updated requirements for residential and nonresidential developments to create affordable units or provide funding to create affordable housing in Cambridge.