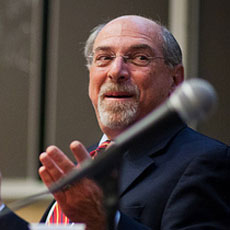 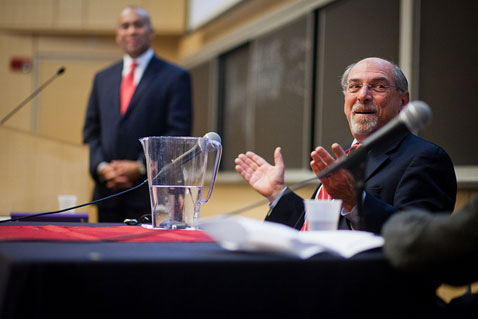 A mere increase of 600 vacant rental units would be enough to push up Cambridge’s vacancy rate to quell the increase in housing costs in here, Northeastern economics professor Barry Bluestone said today in response to questions asked at Monday’s wide-ranging “roundtable” of the Planning Board and City Council.

But substantially more than 600 new units would have be built to result in 600 vacant units – it’s not clear exactly how many.

Councillor Leland Cheung cited the work of Bluestone, a Cambridge resident, on housing, noting that housing prices are driven by vacancy rates.

Chairman of the planning board Hugh Russell replied, “I would be very curious to know how much housing Barry Bluestone thinks we have to create in order to get the vacancy rates to get affordable housing. Because I don’t think we can do it.”

“I mean we could do it – we could put up 50 Rindge Towers,” Russell said, referring to a 504-unit trio of 22-story towers in North Cambridge, “but I know we don’t want to do that.”

Bluestone responded today, saying he targets a rental vacancy rate of about 5 percent “to keep rents from rising faster than inflation,” and that Cambridge’s rate, according to the U.S. Census Bureau, is about 3 percent (or a five-year estimate of 2.2 percent for 2008-12). Bluestone said that below 3 percent vacancy, rents rise very rapidly.

With Cambridge’s census-estimated 29,000 rental units, it would only take 600 new vacant units to raise the rate to Bluestone’s target. “Now, 600 is not that much,” he said.

Of course, Bluestone continued, if those 600 units were immediately occupied, the vacancy rate would drop back down – but maybe not all the way. “We’re now seeing in other communities where the vacancy rates have risen, their rents have stabilized,” he said.

Bluestone said he had been talking to Boston Mayor Marty Walsh’s staff and wanted to bring together the mayors of Cambridge, Somerville and Boston to work with local universities and institutions to build more attractive housing for 20- to 34-year-olds, a demographic responsible for 74 percent of local population growth in the past decade. Bluestone calls this project “Millennial Villages.” 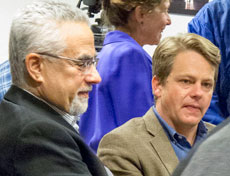 Monday’s roundtable was the first of two special meetings to share ideas and improve working relations between the council and board. The two-hour meeting, which was not televised or recorded by the city, focused on abstract roles of the groups and was short on specifics. It gave a template for a more directed discussion when the groups reconvene together at 5:30 p.m. Jan. 12.

While there was no public comment, about 30 residents attended and listened to elected officials pose questions to the volunteer planning experts appointed by City Manager Richard C. Rossi, with occasional responses from Rossi and Assistant City Manager Brian Murphy, who leads the city’s planning department. 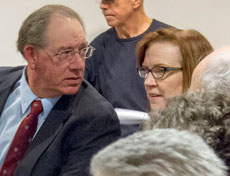 Louis J. Bacci Jr. and Mary T. Flynn, other new Planning Board members, were also at Monday’s roundtable between the board and City Council. (Photo: John Hawkinson)

Most of the meeting was questions from the council to the board, with board members explaining their thinking and advising the council to let them know if changes are wanted, pointing out the council writes the rules – the city’s ordinances – and has the power to change that.

It was also the public debut of three board members: Louis J. Bacci Jr.; Mary T. Flynn; and Thacher Tiffany. The newcomers were generally quiet, though Flynn spoke and praised the discussion as “very, very useful.” With respect to the upcoming master planning effort, Flynn said, “We can’t wait too long … in the process to figure out what the tradeoffs are, what the direction is trying to be.” Flynn asked the council to give planners direction “early on.”

Councillor Marc McGovern expressed his concerns that the council needed to understand the work of the board: “So much of what we do is intertwined. We can either support each other or undercut each other,” he said. “If we’re setting [policies and ordinance] in a vacuum … and it’s really not something that’s going to be helpful or work for you, we need to know that.”

“Where should we best be focusing our efforts?” Cheung asked.

Board member Tom Sieniewicz replied with a focus on vision. He picked up an example of high school students in a protest march to Harvard Square that had been raised earlier by vice mayor Dennis Benzan and continued it: “What if the vision was there was a place to assemble close to the center of government? There are a lot of the vacant lots in Central Square; you can begin to describe a vision,” he said. Sieniewicz said that during the master planning process the council will “find pearls,” and could “champion a particular vision.”

Sieniewicz also suggested other things beyond vision that mattered: the well-being of the citizenry, a concern about social responsibility (including affordable housing) and a focus on sustainability. Sieniewicz, who also sits on the city’s Net Zero Task Force, noted that it would be bringing forth recommendations soon “that I think you’ll find very compelling.”

“A master plan that just says housing is the priority, although that’s really important, is not a vision – is not an urban design master plan,” Sieniewicz said.

Russell also noted that when the board sees problems with the ordinance, they highlight them to the staff, and expect the staff to bring back an analysis that can be passed on to the council. 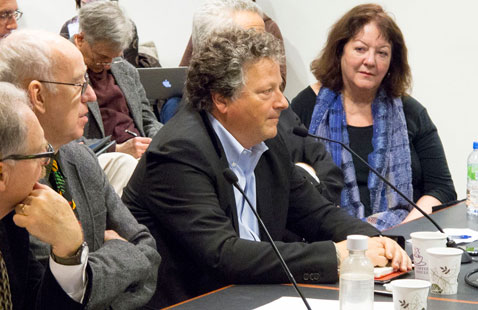 McGovern brought up an often-repeated concern about neighborhood participation in the Planning Board process and requiring developers to meet with neighbors in advance of the special permit process. McGovern had sponsored a policy order in September to require this, but tabled it at the request of community activists who wanted to work on the process and language.

H. Theodore Cohen, vice chairman of the board, told the council that the board is very much aware of these concerns, and how by the time a special permit application comes to the planning board, “generally things are fairly frozen”:

Starting a process earlier with the neighborhood will certainly improve things. The ordinance and our rules and regulations have said we highly encourage this. We’re now interpreting that to say, except in an unusual circumstance: You must meet with the neighborhood groups earlier, and we will be working on changing the rules to make it very explicit that that’s what has to happen.

But Nancy Ryan, on behalf of the Cambridge Residents Alliance, has pushed for a stronger requirement. After the meeting, Ryan said she wanted a more formal mechanism written into the zoning ordinance, not just the Planning Board’s rules, which they can change at any time.

In a Nov. 10 letter to the city manager copied to the board and council, Ryan and co-authors asked the city to form a Neighborhood Advisory Council for each special permit project. Each would include up to nine affected residents, with some nominated by the local neighborhood association, and meet two or three times to review the project.

Ryan said she had “hoped for much more concrete discussion about the neighborhood review process” she had proposed.

She also said that the board does not now make a practice of asking developers to enumerate the neighborhood outreach they have done.

“About 99 percent of the planning done in the city is done by people who work for [the city]. Our role in planning is not to direct the planning efforts, but to comment on the results of those studies and to try to bring some common sense and a sense of justice and equity to what’s going on,” Russell said. “We represent the tip of the iceberg.”

Russell emphasized that in many cases, the questions that go into planning studies are critical to defining their outcome. “Who decided what was studied? Who decided what questions got asked? What were the tradeoffs?”

Russell asked that in the master planning process, the city’s planning department should bring forward to the council and board “their assumptions and questions at the start.” Because “if you don’t ask the right questions, we’re not going to get the right answers.”

Reactions to the roundtable were generally positive.

Bacci, a new board member, said “there were a lot of good thoughts.”

Steven Cohen said he thought the council was serious, thoughtful and open-minded. “It was excellent to get to know each other professionally and personally, and to exchange ideas and to discover that we’re all on the same wavelength,” he said. “it’s going to take work and dialogue.”

Lee Farris, an Area IV resident, said she was really glad it happened, and that “the question of tradeoffs is really the key question, and it did get surfaced. I have for a long time been through so many city meetings, they never work on tradeoffs, generally speaking. To me that’s the essence of what needs to be worked on.”

But Jan Devereux, of the Fresh Pond Residents Alliance, said Tuesday that she was worried: If projects coming to the board are “fairly frozen” on their first viewing, “it struck me that by focusing months of energy of improving the Planning Board’s procedures instead of scrutinizing the deficiencies and dysfunctions of CDD’s planning department, we have been rearranging the deck chairs on the Titanic … If the City Council’s band keeps playing for a few more roundtables there will be no need for a master plan – the ship will already have sunk.”

Councillor Nadeem Mazen said he thought the meeting was “exactly halfway” along the continuum between lip service and functional change, but that he hoped an outcome of this meeting would be concrete bullet items for the January follow-up.

Pam Winters, who has just retired from the Planning Board, said she thought the meeting was “great,” and that a lot of good points were raised, but that the discussion wasn’t as “meaty” as it could have been.

Ryan said she was “hoping for more specificity.”

This story was updated Dec. 3, 2014, to add the second paragraph as a means to clarify Barry Bluestone’s prescription for Cambridge housing costs.