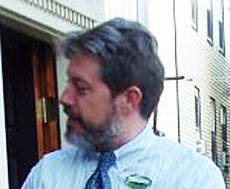 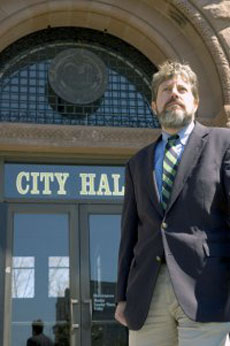 City officials reported the death of Brian Murphy, assistant city manager for community development and a former city councillor, in a message Thursday.

“Brian was a dedicated husband and father, and a close personal friend to so many of us in this city. We mourn the sudden loss of our colleague and friend and our thoughts and support go out to Brian’s family at this time,” the message said. A worker in the city manager’s office confirmed the death but said she was not authorized to offer details.

Employees would be notified of funeral arrangements once they were determined, the message said. Murphy reportedly suffered a heart attack while traveling in New York.

The message appeared on the Cambridge Civic Journal, the site run by longtime Cambridge politics water Robert Winters, who said he was “stunned upon hearing of the unexpected death of a friend … I simply have no words to express my grief.”

Winters called Murphy “an essential person in the civic life of Cambridge,” and several Twitter messages followed with others expressing their sorrow:

The council’s Ordinance Committee meeting for Thursday was canceled.

Murphy served on the council from 2002 to 2009, resigning to be deputy secretary of governmental affairs for the Executive Office of Transportation. He returned in early 2011 to run the Community Development Department after Beth Rubenstein left for a role in planning and development at the University of Massachusetts.

He led a department of 44 full-time employees and additional independent contractors, appeared at nearly every meeting of the Planning Board, council and Cambridge Redevelopment Authority, trusty iPad in hand, and played a role in the most vital aspects of the community: community planning, economic development, environmental and transportation planning and housing, including the administering of federal Community Development Block Grants that help people with low and moderate incomes, mainly in the areas of housing and human services.

He also was a power during his time on the council, including being chosen to craft the city manager’s compensation alongside Mayor David Maher.

During his 2005 race for reelection, one resident said she gave Murphy her No. 1 pick because he seemed to be “the only member of the council who wants to talk about things that need to be fixed.”

He also was appreciated by his former peers on the council, who welcomed his return to the city as assistant city manager after time working with the state. “Brian’s a great guy and a good colleague. I’ve known him for several years and I think he will bring a lot to this position,” Maher said, citing his work with the Department of Transportation – during a tumultuous time of reconfiguration that eliminated entire, long-standing departments such as the Massachusetts Turnpike Authority – as well as his experience in Cambridge. “He knows the city well, he lives here, he worked on the council on zoning issues.”

“I’m very pleased – thrilled – to be working with him again,” Maher said at the time.

Murphy, born in 1964, was a graduate of Harvard and the University of Chicago School of Law; he lived on Mount Auburn Street with a wife, Kate Champion Murphy, and had two children.

More information was sought Thursday from Lee Gianetti, the city’s director of communications and community relations.