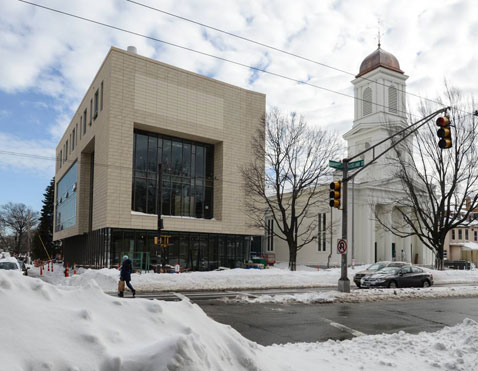 Members of the public visiting the “Breaking Ground” art exhibit Feb. 19 to March 22 are bound to be a little distracted by the walls holding up the art.

“Breaking Ground” is the inaugural show in Lesley University’s Lunder Arts Center, a four-story terra cotta and glass building with 74,000 square feet of galleries and studios that seals the $47 million move of Lesley’s College of Art and Design to Porter Square from Boston’s Kenmore Square.

“Lesley University’s new Lunder Arts Center is a state-of-the-art complex … created to teach tomorrow’s artists, designers, filmmakers and others. It is the new home of the Lesley University College of Art and Design, and will serve as a nexus for the arts for the larger Cambridge community,” university officials said in their exhibition invitation to the public.

This project literally moved the 165-year-old former North Prospect Church, which the university bought in 2006, away from the corner of Roseland Street at 1801 Massachusetts Ave., making room for the connecting Bruner/Cott-designed building, a glass-walled commons and the structures’ classrooms, studios, digital and other laboratories, faculty offices and flexible spaces for collaborative work. 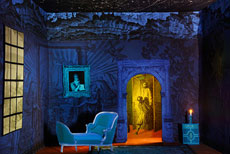 Lissa Rivera’s “Blue Room” is among alumni art exhibited in the show from Feb. 19 to March 22.

The commons opens onto a plaza on Massachusetts Avenue that serves as the entrance to the Arts Center. The ground floor is the main art exhibition space where the “Breaking Ground” alumni art exhibit is installed – a juried exhibition with painting, sculpture, printmaking, photography, design, illustration, animation and video.

The public can attend the show (and check out the building) from 6 to 8 p.m. Feb. 19 for free by reserving admission here.

Lesley began in 1909 in the Everett Street living room of Edith Lesley Wolfard, whose goal was to educate kindergarten teachers. Education has remained a focus at the school, which grew into Lesley College in 1945 and became Lesley University in 2000, according to a school history. A merger with The Art Institute of Boston – founded by Roy Atherton Davidson in his Back Bay studio in 1912 as the School of Practical Arts – in 1998, adding some 500 students to an already surging student population. The university changed its school’s name last year in preparation for the move.

Under president Margaret A. McKenna, who left Lesley in 2007 to run the philanthropic arm of Wal-Mart, the university had a plan to sign an 85-year lease with the Massachusetts Bay Transit Authority for the air rights to the Porter Square commuter rail tracks, meaning it would build a deck atop them, capping it with retail and academic space. The $20 million project would have changed the T stop’s name to “Porter/Lesley.”

Planning paused during negotiations in 2005, and the university put its attention on consolidating its campuses in Cambridge with the arts center, named for Lesley Class of 1959 alumna Paula Lunder and her husband, Peter.

“The Lunder Arts Center is the high-water mark in a period of strategic expansion at Lesley,” university President Joseph B. Moore said. “The Center helps Lesley to continue to give our students an educational experience of the highest quality, support the talents of our faculty and deepen our relationships with our neighbors and alumni around the arts.”

“The Arts Center will expand the long tradition of offering robust events and activities to the community, including exhibitions, lectures, conferences and symposia,” school officials said.