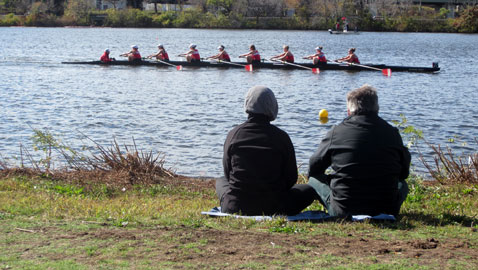 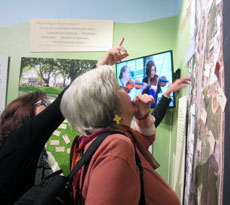 If there’s anything that makes trudging through more snow sound worth it, it’s a free dessert buffet.

But the offer of a table full of mystery desserts isn’t all that’s coming Monday at the “Magazine Beach: A Place Apart” Community Potluck & Dessert Café – two events combined by The Cambridgeport Neighborhood Association as a result of the nearly constant snowfall and transportation troubles of the past month, but both focused around an exhibit looking at the past, present and future of the 15-acre Magazine Beach and asking residents what they want from the park’s redesign.

“The goal is to get people to the exhibit. It hasn’t been a great month for getting to the Annex through all the snow,” said Cathie Zusy, chairwoman of the Cambridgeport Neighborhood Association’s Magazine Beach Committee, referring to the City Hall Annex hosting the gallery space that holds “Magazine Beach: A Place Apart.”

The exhibition closes Feb. 27, with the first public meeting relating to the landscape design – inspired in part by residents’ comments at the exhibition – planned for this spring.

Best Ever Chicken, a bluegrass band with Cambridge players, will provide the music, and there will be remarks by Charles Sullivan, of the Cambridge Historical Commission; Renata von Tscharner, of the Charles River Conservancy; and Tom Reece of the state Department of Conservation and Recreation. “Magazine Beach: A Place Apart” can be throughout.

While the exhibition focuses on Cambridge’s second-largest park, it also explores the larger question of how decisions about public space get made.

Now the home of an 1818 powder magazine turned bathhouse turned Department of Conservation and Recreation garage, a 1912 boathouse, a 1950 swimming pool and a 1971 sewer facility, the site has been eyed over the years as the location of a stadium, hospital, army lab and interstate highway.

With the state preparing to oversee the redesign this year of the upstream part of the park, from the playing fields to the Riverside Boat Club, the exhibition asks: Why do some plans come to fruition when others don’t?