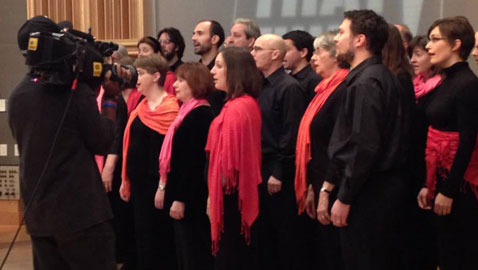 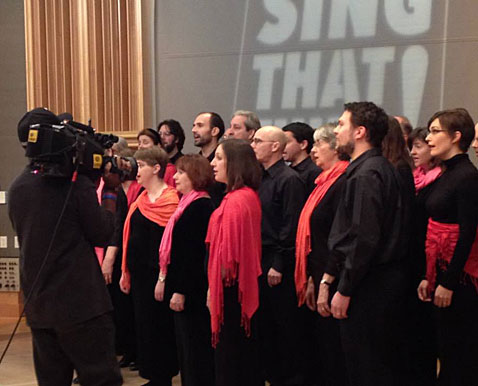 Two Cambridge groups are competing in a new WGBH show, “Sing That Thing!”: Syncopasian, a 17-member student group from the Massachusetts Institute of Technology, founded in 2008 and specializing in Asian pop; and Musica Sacra, a nonprofit choral ensemble founded in 1959.

Led by director Mary Beekman, now in her 30th season, Musica Sacra has a repertoire spanning five centuries. For its 55th anniversary, Musica Sacra is performing Bach’s “Mass in B-minor” at a March 14 show at the First Church Congregational in Harvard Square, followed by a May performance of “The Song of Songs: Sensual texts from the Bible’s raciest Book” with settings by Renaissance composers and by Boston’s Daniel Pinkham.

The MIT Syncopasian student group is the other Cambridge chorus in competition on the show. (Photo: Syncopasian)

Syncopasion has public performances in April at the Spring Greater Boston Invitational Songfest 2015 and in May at a spring concert.

They are among 24 amateur singing groups chosen from across southern New England to compete – including nine high schools groups, six collegiate choirs and nine community choruses – from more than 50 hoping to be part of the show’s inaugural season.

The series began taping preliminary rounds this month at the station’s studios in Brighton. The show premieres at 8:30 p.m. April 17 on WGBH 2 at and tapes its finale May 12 in front of a studio audience. The top two from each category will perform a song commissioned for the series.

“WGBH has been Boston’s leading arts broadcaster since we first went on the air six decades ago. ‘Sing That Thing!’ continues a strong tradition of connecting new audiences with the arts,” said Liz Cheng, the station’s general manager for television and executive producer of the show, in a press release. “The groups showcasing their vocal talents on ‘Sing That Thing!’ represent an impressive array of talent. These a cappella groups, gospel choirs, classical music ensembles and large choruses are among the best New England has to offer.”

The series includes groups from four categories: high school, collegiate, small adult group (with eight to 16 members) and large adult group (with 17 to 60 members). It is hosted by Boston Children’s Chorus artistic director Trecek-King, and includes coaches – Jane Eaglen, Larry Watson and Jared Bowen – who mentor the groups and determine which get to the finale.

Eaglen is an opera singer and instructor at the New England Conservatory. Watson is a lyricist and professor in the Berklee College of Music ensemble department. Bowen is WGBH News’ executive arts editor and hosts WGBH 2’s local arts series, “Open Studio with Jared Bowen.”

More information about the series is available here.

Next story: Cambridge groups get to ‘Sing That Thing’ semifinals, with one winning its category