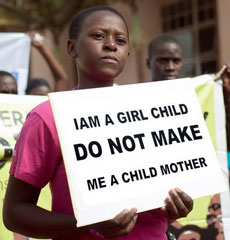 From Babson College student Clara Elbaz of Binney Street, March 1: A wedding is every little girl’s biggest dream and every woman’s most beautiful day. But reality is harsher when we are faced with the fact that throughout the world, 14 million girls are married by force before they turn 18. That makes one girl every two seconds, and this practice is not going to end anytime soon.

Unlike arranged marriage, which involves both spouses’ consent, forced marriage by definition means that an individual has no say in whom she or he weds. This practice is a tradition in most developing countries, but occurs

throughout the world: 46 percent of girls under age 18 are married in South Asia; 39 percent in sub-Saharan Africa; 29 percent in Latin America and the Caribbean; 18 percent in the Middle East and North Africa; and in some communities in Europe and North America too. It is a global issue that, although condemned by international law, is still very much practiced.

Mostly, victims are girls and young women under the age of 24. These young brides are victims of poverty, cultural practices, poor access to education and perpetuated stereotypes that undervalue the role of women in society. These victims are not only forced into marriage, but in most cases they suffer physical and psychological violence and diseases such as AIDS/HIV, as well as childbirth defects and possible maternal mortality.

Some argue that this is a cultural practice and that international nongovernmental organizations have no right to impose western influence upon historic traditions, reflecting the notion of cultural relativism. However, can it be considered imperialist of us wanting to give a voice to those who are silenced? Is it wrong to make this practice obsolete so girls can aspire to education and a brighter future?

Abolishing this practice will not happen overnight, but minds are evolving, even in the communities most affected. For the first time in history, a court in Sierra Leone has convicted rebel leaders of forced marriage. Last June, the British government made forced marriage a crime punishable by seven years in prison. International bodies are raising awareness about this horrible practice, which is considered even worse than sexual slavery because of its length and impact on all aspects of a woman’s life: her health, her safety, her mind, her education, her future.

Raising awareness is the most effective way to change mentalities and end this practice. If local communities are educated about the values of investing in girls as much as boys, and offering education to them, this tradition will be locked in the past.

Changing minds is all it takes, and simple steps such as signing a petition or sharing facts can play a much-needed role in fighting this cause.

If you want to learn more about child brides and sign a petition seeking political action, feel free to visit this site.