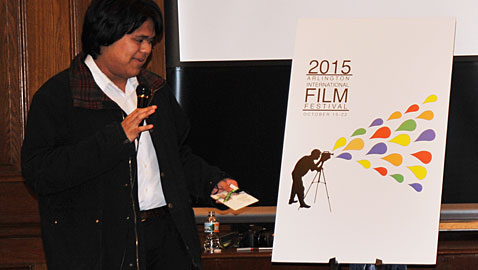 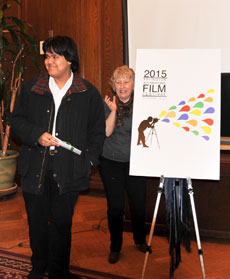 A 10th-grade Cambridge student who would like to be a filmmaker has won the fifth annual Arlington International Film Festival poster contest.

Naythan Lowe’s winning design will become the face of the 2015 festival, to be held Oct. 15-22 at the Kendall Square Cinema after four years at Arlington’s Regent Theatre.

Vicky Giannakas, manager of the Arlington branch of the Watertown Savings Bank, the main contest sponsor, presented Lowe with a $500 check at an Arlington Town Hall reception, attended by about 30 people March 12.

As the flash from cameras captured the moment, Lowe said, “After working for the first time with design software, my teacher asked me if I wanted to design a poster for the AIFF poster contest, and I said, ‘Sure!’”

He is a student at Community Charter School of Cambridge and participates at the Community Art Center in that city.

Lowe’s poster was chosen from among the more than 50 entries submitted to the annual contest. Of those, the posters of 18 finalists hung outside the Lyons Hearing Room, on the second floor of Town Hall.

At 14 years old and a sophomore, Lowe is an aspiring filmmaker and has been part of the teen media program at the Community Art Center for the past two years. A member of the video studio class at the program, he has created films focusing on topics ranging from social justice to comedy.

He is part of the DIYDS!!, crew, which stands for Do It Your Damned Self, a national youth video and film festival. He has co-designed T-shirts for the festival and is part of their selection committee that picks the best films to be screened out of the 150 youth films submitted.

The fifth Arlington International Film Festival is set for Oct. 15 through 22 at the Kendall Square Cinema, Cambridge.