‘White God’: Dogs are fighting for justice on streets (and in the subtext) of Hungary 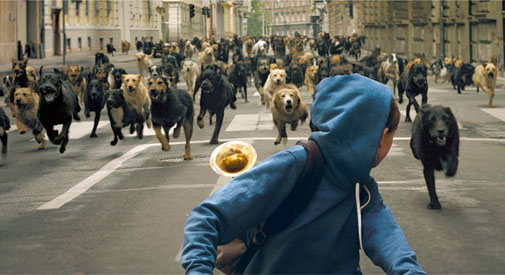 ‘White God’: Dogs are fighting for justice on streets (and in the subtext) of Hungary

The Hungarian-Swedish co-production “White God” begins with an absurdist slo-mo sequence of a young girl on a bike pedaling away from a sea of pursuing dogs. None of the canines is ferocious – most are quite cuddly – but still the girl rides on with urgency and fear on her face. Surly this must be a dream sequence, and it’s tucked away as such until later in the film, when it’s realized it was no subconscious imagination. What has taken place is a “Rise of the Planet of the Apes” resurrection by man’s four-legged best friend. 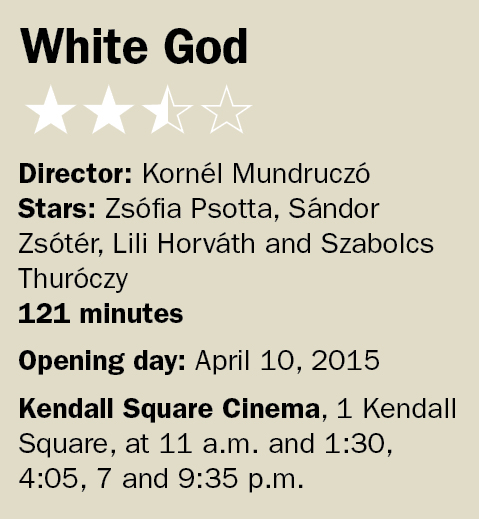 From the opener we wind back to a story about a preteen named Lili (Zsófia Psotta) and her dog Hagen, described as a Hungarian street dog – he’s got a German Shepherd’s body, a golden coat, a boxy face, piercing eyes and a curled tail like a Shar-Pei (played by Arizona sibs Luke and Body, trained by Teresa Ann Miller). Problem for Lili, who’s quite talented with a horn, is that her parents are divorced and she has to go stay with pa (Sándor Zsóstár or Zsótér) for an extended period. Pa’s not much for animals. He works in a meat-packing plant, and after Hagen spends the first night in his new digs barking away the night, the pooch is punished and put out. The girl never stops looking for her dog, who becomes the leader of all the city’s stray curs, eluding dogcatchers and stealing scraps here and there until ending up with a noose around his neck and in the pit, fighting other dogs Michael Vick style.

The collective dog wrangling and stunts helmed by Miller, when en masse and on the streets, are spectacular. The scenes of actual dogfights look staged and unreal. The film overall is uneven, gorgeously shot and well intentioned, but overwrought and hyperbolic. The film’s director, Kornél Mundruczó, clearly owes something to Samuel Fuller’s “White Dog,” one of the iconic director’s last works, about a white German Shepard that had been trained to attack black people. It’s not only in play in the title; there is a subtext not so subtly depicting oppression and subjugation in Hungary where Gypsies, likened to street mongrels, have been targeted as a lesser ilk.

Recognized at Cannes and submitted by Hungary as its Foreign Language Film entry for the Academy Awards, “White God” is something bold and experimental. Beautiful and brutal, and even with its shortcomings and derivative leanings, it’s a unique experience. Allegedly the street dogs used on the set were found homes afterward – a tidbit that adds to the film’s collective warmth and resonance.