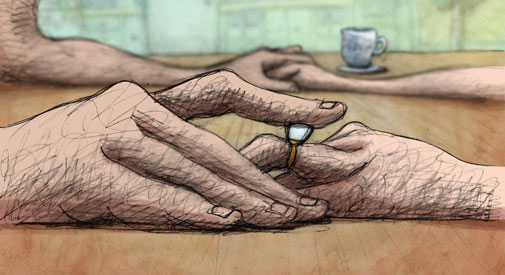 While at a fair, Ella and Jake fall in love during a near-fatal bumper car accident. The two are immediately engrossed with one another until a conniving “other” woman drives a wedge between the two out of jealousy. Thus begins a tragic push and pull between the two as their jealousy, bitterness and anger leave them far from their love-filled beginnings. 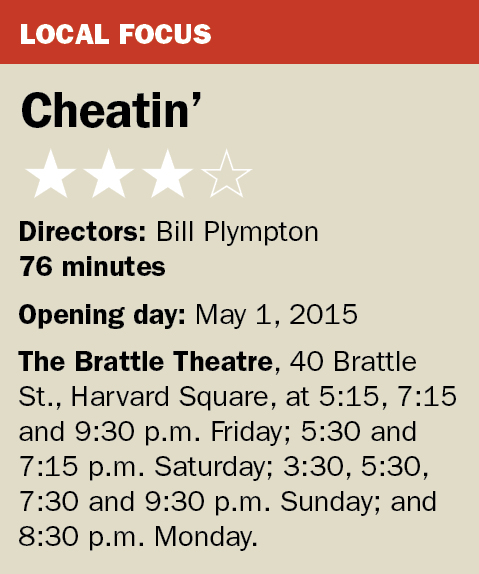 Without question, I’ve never seen a film like “Cheatin.’” Deceptively simplistic, if you’re like myself and unfamiliar with prior Bill Plympton work, the animation is jarring at first. Giving off a hand-drawn appearance with crude lines and obvious shading, the film comes to life through its movement, and it being an animated film doesn’t keep Plympton from shooting with cinematic flair. Early shots are positioned below Ella, watching as she strolls through the fairground, looking larger than life to the viewer, demonstrating her effect on the onlookers. There’s a sense of surrealism in a scene where a neighbor tries to get Jake’s attention by letting loose her drying laundry into his yard, as Jake hardly notices and the sheets and clothing creates shadows above.

Animation is where some of our more curious minds get to play, building worlds without limitations where the physicalities of characters are exaggerated and the laws of the real world are loosened or casually ignored. There’s far more to the field than what we’ve seen from Pixar, Disney and DreamWorks, the most well-known studios for animated films – Studio Ghibli produced my favorite film of last year, “The Tale of the Princess Kaguya,” and GKIDS continues to produce beautiful little films with this year’s “Song of the Sea” and “Ernest and Celestine” before it. But if there’s any film that most resembles Plympton’s “Cheatin,’” it’s the 2003 film “The Triplets of Belleville,” directed by Sylvain Chomet. Both create characters with grossly distorted proportions (icscles in particular) and are dialogue free.

If anything, “Cheatin,’” is reminiscent of a silent era film. It’s reliant on physical humor and sound effects. Over-the-top facial expressions are used with comedic beats, and Nicole Renaud’s music plays as much of a character as the characters themselves. Without words we’re able to understand motives, attraction and scheming. It’s a film that pays attention to facial expressions.

The pure, outlandish artistry nearly makes up for the more cartoonish gender tropes that pop up. In a world where Jake can drive his car into a river and survive, or where Ella’s legs are drawn to be almost the entire length of her body, there needs to be a suspension of disbelief. But it would have been appreciated if the characterization could have gone beyond Ella liking to shop and women being jealous by nature. The artistry and build-up is intelligent, so why slack on the characterization?

It’s a bizarre little film and enjoyable for the most part. Running at a brief 76 minutes, it speeds full throttle, building momentum the entire time until the insanity of the third act. Grandiose in the storytelling, with characters veering near caricature juxtaposed to strong effect with simplistic artwork, “Cheatin’” makes for a more adult atmosphere than most animated films.