Two parts of ‘The Dear Hunter’ over two nights, and plenty of fans join the party 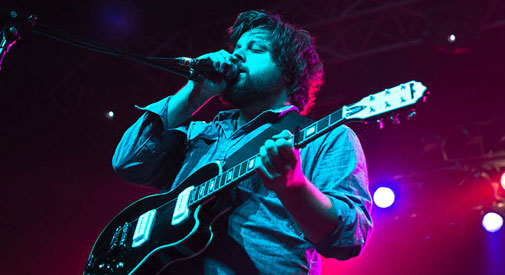 Two parts of ‘The Dear Hunter’ over two nights, and plenty of fans join the party

Will there be room on stage at The Sinclair for Casey Crescenzo, the rest of his Dear Hunter band, a string quartet and Crescenzo’s ambitions?

It’s not just that Crescenzo started “The Dear Hunter” in 2006 (after a prelude EP the previous year) with plans for six albums telling a single story. In between acts of “The Dear Hunter,” he produced the nine-EP “Color Spectrum” project, with each album dedicated to one color. (The Beatles had a White Album, but Crescenzo has a white album, black album, red album …) Two years ago the band released an enthusiastically reviewed album called “Migrant” that stands out because it’s not a concept album.

Now that “The Dear Hunter” and its tale of a boy growing up in the 20th century is nearing its fourth act, due for release this year, Crescenzo is touring to show off the second and third acts. Tonight sees “Act II: The Meaning Of, And All Things Regarding Ms. Leading” in its entirety, and “Act III: Life and Death” will be performed Wednesday.

The Providence, R.I., indie-prog-rock band has its moments of grandiosity, befitting Crescenzo’s tendencies toward opera-scale ideas, but much of the music has a clean, clear sound with strains of folk and even classical (hence the string quartet) filtering through.

The tour, Crescenzo said, is part of his efforts to grow from studio multi-instrumentalist to showman.

“Along with that wish to constantly grow as a songwriter came the desire to improve as a performer. This, at first, felt incredibly foreign to me … anyone who witnessed the early shows for The Dear Hunter can vouch for that palpable discomfort,” he said in a letter to his fans. “Over time, I began to discover the live performance as an opportunity to create something new and fleeting each night, with an entirely different palette of instruments, both musical and human.”

Now that he’s come to appreciate the experience, he said, “I was given the opportunity to design a tour that I had never thought possible – a night devoted to performing with The Dear Hunter and a string quartet.”

The Tuesday show sold out, and it’s getting close for tickets for Wednesday’s performance of “Act III: Life and Death,” playing with Northern Faces and Brian Marquis in an 18-plus show with 7 p.m. doors at The Sinclair, 52 Church St., Harvard Square. Tickets are $20.