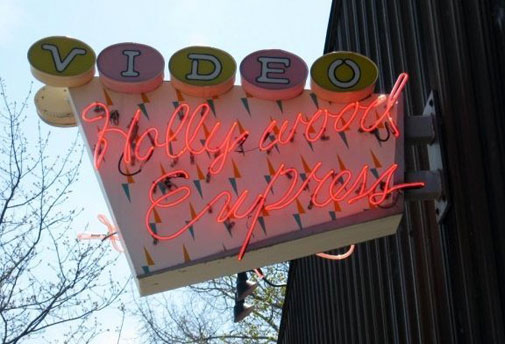 Hollywood Express is closing June 30, ending an era of video and DVD rentals in Cambridge. (Photo: Pete V. via Yelp)

After nearly 30 years – and long after its competitors gave up fighting Redbox kiosks and Netflix and moved on – Hollywood Express is closing, ending the era of independent video renters in Cambridge.

The final day is June 30 for the store at 1740 Massachusetts Ave., near Porter Square, and until then the DVDs and other wares are on sale. On Thursday there were a few browsers in the store, looking through the racks while the dog-fancier satire “Best in Show” played on the monitor.

“It just too tough,” said the store’s 19-year general manager, Joe McClure, breaking the news to a regular customer who wandered in unaware. “It’s amazing we hung on this long.” 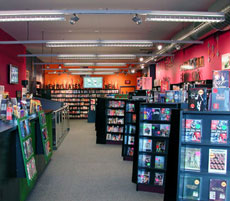 Hollywood Express locations in Central Square and Somerville’s Davis Square closed in past years, leaving only a Porter Square location in business since 2010. (Photo: Hammer Architects)

A previous Hollywood Express location at 765 Massachusetts Ave. in Central Square closed in April 2010, with the space eventually becoming the Life Alive restaurant. Before that, the Davis Square, Somerville location closed at 238 Elm St., becoming the Buffalo Exchange vintage clothing shop, and there was a fourth location at Twin City Plaza in East Cambridge. The small chain began in 1987 and gained a reputation as a haven for the quirky, cultish and high end of cinema, renting Hollywood hits as well as lesser-seen indie fare. “This place is a must-visit for any cinephile/movie geek/VHS enthusiast in the Boston-Cambridge area. The people who run this place clearly know and love movies – not only popular Hollywood hits, but also the obscure, foreign and under-seen stuff – and it’s made for customers who are similarly knowledgeable and adventurous about what they watch,” one reviewer said.

“Recommendations from knowledgeable humans still beat algorithms,” another said. “Remember, folks, there are lots of movies that Netflix, etc., still don’t have!

“It exceeded every possible expectation I ever had for it by quite a bit, and then some extra. It was able to have such a good run and run for so long, in the face of a culture that is in no way interested in art, culture, avant garde music, music in general or vinyl.”

McClure talked more Friday about the closing of the last Hollywood Express. His comments have been lightly edited and compressed for publication.

On making the decision to close with owner George Lewis:

“It just came down to the volume of customers. We didn’t have the volume anymore. We had great, loyal customers – but just not enough of them. We just decided that instead of trying to struggle, let’s just close it and move forward. We have a great landlord who supported us to the very end, he gave us rent breaks and really worked with us to make it work. But technology just caught up with us.”

On the surprising way the Internet changed the business:

“I’m not upset about the Internet – it’s a great thing. But what it’s done is that nobody browses anymore. It’s kind of trained people to go after one thing. It used to be that when people shopped, before they got anything they looked around. In the last year, nobody ever looked around in here. They came in, they asked for a thing, if we didn’t have it, they left. That mentality, more than anything, is what destroyed us – people all of a sudden thought bricks-and-mortar stores should be the Internet. I’ve talked to other retailers about that and they’re, ‘Oh, yeah, that’s died. People don’t shop anymore.’”

On what’s next for the building:

“Rite Aid is going to be here forever, they just re-signed. And Simon’s Coffee Shop is here and will be here forever. I think the owner, Richard Grossman, will probably do a bit of work down here before trying to get somebody else in. It’s going to be a tricky thing: There are no windows, it’s a basement. We were a destination – people knew what was down here.”

On what’s next for McClure:

“I’m going to finish up here, probably take it easy during the summer and try to get involved in something in the fall. I’m not too worried about it. And I feel lucky – I’ve pretty much done anything I’ve wanted. So I’ll just start doing something else.”

On reaction to the closing announcement:

“I’m really shocked. I knew it would happen, but I am really amazed by the response from the regulars and the community – the outpouring. Everyone’s saddened by it and feels a real loss for it, and everybody’s been real nice coming in and saying what a great job we did, and everybody who’s worked here over the years are starting to call and say it was a wonderful place.”

“I couldn’t be prouder of working here. I worked here for 19 years and there wasn’t a day that I ever felt bad about coming to work. Being someone who loves film, it was a dream come true to be able to work in a place like this and be around people who love film too. We’re lucky to have that Cambridge community of people who love film. They’re not the casual film person who goes to the movies every now and then. Between us, The Brattle Theatre, the Harvard Film Archive, they’re people who live film, and I feel really lucky to have been a part of that. So I absolutely have no regrets. It’s sad that we’re closing, but that’s the way it goes. And even though it’s sad news, I don’t want people to discount what this place was – it was a really special place, and I have nothing but great memories about it. It’ll always be part of me.”