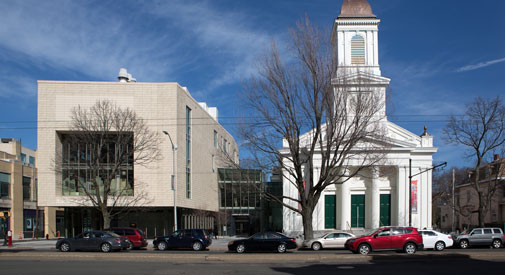 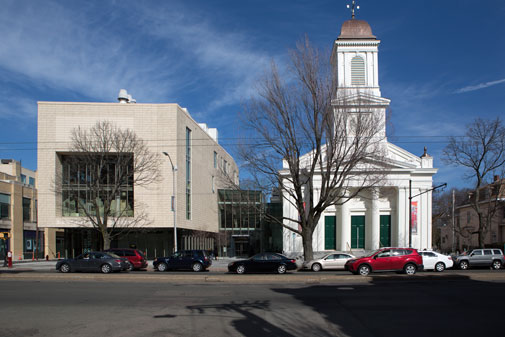 Lesley’s $46 million Lunder Arts Center at 1801 Massachusetts Ave. in Porter Square honors and preserves an important element of Cambridge’s history with a fully restored exterior of the 19th century former Congregational Church building. The university marries the venerable structure to a modern, four-story terra cotta building via a striking three-story glass entry commons, a future-focused hub of the arts that is built to LEED Gold environmental standards.

Charles Sullivan, executive director of the Cambridge Historical Commission, said, “Lesley University’s Lunder Arts Center project exemplifies the highest standards of historic preservation and adaptive reuse of an older structure. This project addressed the decay and loss of character that the church had suffered over many decades and gave it a new use that will support its preservation far into the future.”

Inaugurated in 1997, the Preservation Awards celebrate “outstanding historic preservation projects and the commitment of the individuals who worked on those projects, thereby making Cambridge a more attractive and desirable place in which to live and work,” the commission said in a statement.

Lesley President Joseph Moore said he appreciates the honor, especially as it “reflects Lesley’s core value of sustainability” via the restoration of an important building, as well as the reuse of most of the former church’s furnishings, including its pipe organ, in places ranging from Boston’s Jamaica Plain neighborhood to Texas. One example of this commitment is seen in the restoration and reuse of the church’s stained-glass windows in the Moriarty Arts Library.

At a May 27 reception Lesley hosted in the Lunder Arts Center, Moore talked about how the building “enhances Lesley’s relationship with the neighborhood,” both by preserving a beloved landmark and by emitting light and vibrancy onto Porter Square and inviting neighbors into the publicly accessible galleries and arts library.

In December 2013, crews used hydraulics to roll the former church 100 feet to the south side of the lot and closer to the avenue to give the building more prominence and allow for construction of a lower level under the site. This was the former church’s second move. The first came in 1867, when draft horses hauled it from its original Harvard Square site to Porter Square. The former church now houses the arts library and design studios.

For a list of other winners and more information, see the Cambridge Historical Commission’s Preservation Awards page.