Residents, city, Leggat settle on courthouse, clearing way for an appeal of development 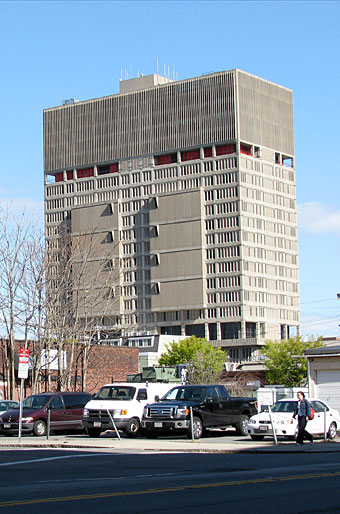 Residents, city, Leggat settle on courthouse, clearing way for an appeal of development

The city, state, real estate developers Leggat McCall Partners and five local residents and neighbors have agreed to settle the outstanding claims in a lawsuit about redevelopment of the former Edward J. Sullivan Courthouse in East Cambridge.

The settlement means the lead plaintiff, Michael Hawley, will be able to pursue an appeal of the Land Court’s May 19 decision in the Massachusetts Appeals Court.

Settlement papers were filed Tuesday and today, and were agreed to by all of the parties. They appeared on the court’s electronic docket today. The full terms of the settlements are confidential, so it is not clear whether money changed hands. For purposes of the settlement, the two consolidated cases were treated separately.

The first case, Daniel Hill versus Cambridge Planning Board, was dismissed in its entirety. That means Hill, a local lawyer whose office is across the street from the courthouse, will not be able to appeal the case, said Kevin O’Flaherty, Leggat’s attorney.

In the second case, Hawley et al. versus Cambridge Planning Board, Hawley and his fellow plaintiffs agreed to dismiss their claims in the lawsuit other than the question of whether the courthouse was a “lawful nonconforming structure.” Judge Robert Foster of the land court ruled in May that it was indeed a lawful nonconforming structure, a win for the developer and the city’s Planning Board, which voted to grant a special permit to allow development. Foster’s ruling was a ruling on “partial summary judgment,” which decided one portion of the cases where the parties agreed upon the facts but did not dispose of all cases in their entirety.

The Hawley settlement says the plaintiffs – Michael Hawley, Graham Gund, Marie Saccoccio and Roger Summons – reserve their right to appeal with respect to the nonconformity issue.

Hawley said that “the rest of the stuff was noise … the nonconformity issue is the important one.” He looks forward to the appeal, he said.

Regarding the May ruling on the main issue of the case, Hawley said in an email that “it maintains the status quo and simply sides with the bucks. The defense claims that everything built by government in excess of zoning should be grandfathered … It’s bad enough when the government creates a fiasco, but perpetuating such a mistake is wrong. This is the antithesis of enlightened planning or sensible zoning.”

Settling the remaining claims in the case allows the nonconformity issue to reach the appeals court several months earlier than it otherwise would. O’Flaherty said that any of the remaining plaintiffs could file an appeal, and that they would have 30 days to do so from the date the judge formally closes the case.

A status conference in the case is scheduled for Monday morning, so it is likely the 30-day appeals clock will begin some time after.

Hill declined to comment, saying the terms of the settlement were confidential, and Mark Bobrowski, Hawley’s attorney, could not be reached. The City of Cambridge did not return requests for comment.