‘Wright On! Edgar Wright, His Influences’ casts a funny director in serious spotlight 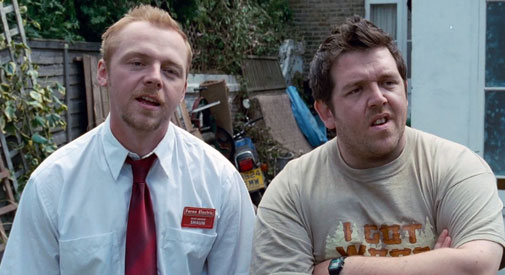 ‘Wright On! Edgar Wright, His Influences’ casts a funny director in serious spotlight

If you haven’t seen any Edgar Wright films in theaters, this weekend is the time to do it. The Brattle hosts a “Wright On! Edgar Wright and His Influences” series from Friday through Sunday, and it’s not leaving anything out (this side of his 1995 debut, anyway). The program highlights films that have influenced the director’s style (ranging from “The Adventures of Tintin” to “Invasion of the Body Snatchers”) along with all of his films, including “Scott Pilgrim vs. The World,” and a triple feature on Sunday of his Cornetto trilogy: “Shaun of the Dead,” “Hot Fuzz” and his most recent, “The World’s End.”

Wright is one of the most inventive directors working. His first major success was the television show “Spaced,” in which he worked with his two main collaborators, Simon Pegg and Nick Frost. Despite it being one of his first experiences behind the camera, he was already showcasing an edge in how he directed. Comedies today are typically improv heavy, with much of the comedic value derived from its performers. While Wright typically has a cast full of game actors who can be relied on to be funny, he doesn’t rest there, and instead takes a meticulous approach in making sure his directing sells the punchline as well. In “Scott Pilgrim vs. The World” (2010) we see a lot of this in the way people come in and out of scenes – in particular, a moment where Scott dives out of frame to escape an ex-girlfriend.

“Shaun of the Dead” (2004) makes great use of quick cuts, abruptly pulling focus on an object such as two mugs clinking together to end a sequence of narrative events. Or at the start of the film, when we’re introduced to Shaun through a series of smash cuts as he goes on performing mundane rituals as the world around him begins to subtly become stricken by a zombie virus. “Hot Fuzz” (2007) uses that tactic, showing how comedy directing can tell a story as well as drama in introducing a character, getting him from Point A to Point B and making a story out of it, such as when Nicholas Angel (Pegg) is transferred to a quaint English village.

“The World’s End” (2013) applies much of what Wright used for “Scott Pilgrim” but dials down the frenzied tone – instead of comic book action, the fight sequences take on a more naturalistic feel, and the humor is found often in the choreography of a scene: moments when characters walk down the street in sync with one another, or a fight scene in which Pegg’s character must fight off a horde of alien invaders while trying to keep his beer from spilling.

Wright’s films, at least for the trilogy, have always worked as Trojan horses, slipping in themes and ideals masked in entertaining subgenres. “Shaun” is about uniformity, while having fun subverting the zombie genre and playing as an ode to the works of George Romero. “Hot Fuzz” gets to be a buddy cop comedy while speaking about the corruption of government, while “World’s End” is essentially about a depressed man looking for a last night of freedom. Wright constructs clever scripts, comedic in nature without ever diminishing emotional moments.

Without a film coming out in the near future, “Wright On! Edgar Wright and his Influences” isn’t one to miss.