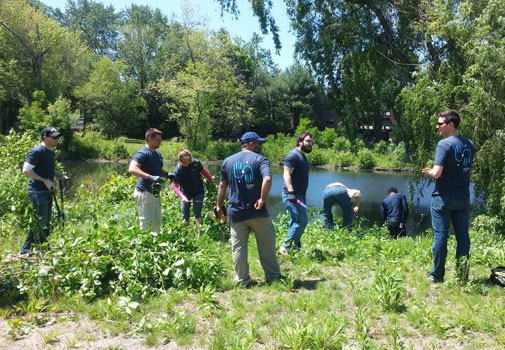 From the Friends of Alewife Reservation’s Christine Heady and Ellen Mass, July 15: The Friends of Alewife Reservation thank the City of Cambridge for funding an extensive vegetative management plan in the Alewife Stormwater Wetlands that will be put in effect in October. In addition to removing invasive plant species from wetland and upland areas, this program will increase professional monitoring in the Alewife area. Specifically noted was the stagnant water in the wetlands area and the increased buildup of scum, algae and litter in the wetlands and oxbow before Little River, as the Friends have noted for a year now.

The organization continues to worry about the wildlife and its habitats in the wetland area and along Little River and is hopeful the visual monitoring for invasives and debris will come along with increased chemical and bacterial monitoring, since there’s hundreds of housing units being rapidly built in the River and wetlands.

The city has installed two water monitoring stations (on the north and south sides) of the wetlands, which could help residents and others know water-quality conditions. With the increased construction likely causing more pollution in the area, it is urgent that the city test consistently for bacteria such as E.coli and Enterococcus; according to the Massachusetts Water Resources Authority, Alewife Brook (Little River) tests higher than most other points in the Mystic River Watershed. In the past year, we have not seen updated results, but volunteer monitors have reported more than a dozen dead mammals and birds in the Alewife Reservation.

This vegetative management plan is a step in the right direction, but due to the dire situation of our animals and plants in this rare open space watershed, more direct action is needed while large-building water infrastructure hookups are permitted.