Two rabid animals captured at Fresh Pond in July, one after biting at 8-year-old’s foot

Two rabid animals captured at Fresh Pond in July, one after biting at 8-year-old’s foot 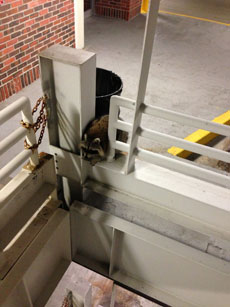 Raccoons are also in urban areas, like this one spotted rooting through garbage at an East Cambridge building in December 2012. (Photo: Chris Kelly)

After capturing a second city raccoon testing positive for rabies, the Animal Commission is reminding residents how to protect themselves against the disease, which is usually spread through the bite of a rabid animal.

The raccoon was captured after it “bit an 8-year-old’s sneaker but did not make contact with the skin,” said Ini Tomeu, the city’s public information officer.

That Thursday incident followed the July 13 capture of a raccoon at Fresh Pond Reservation that also tested positive for rabies; early this month two rabid animals were found in neighboring Belmont, although not close to Fresh Pond. A skunk was found toward the town center, Tomeu said, and the fox was near the Belmont Hills.

Raccoons are a common transmitter of the disease, along with skunks, bats and foxes, according to the Centers for Disease Control and Prevention.

The virus infects the central nervous system, eventually causing disease in the brain and death – killing 59,000 people each year, or about 160 daily, according to a study widely reported on in April. The numbers were called bigger than expected by the study authors at the Global Alliance for Rabies Control.

The Animal Commission are urging people to take precautionary measures against rabies, especially at Fresh Pond Reservation. “Dog owners should maintain their pets in clear view and keep them from running in brush areas where they cannot see if something occurs,” Tomeu said in a press release.

Other tips for protecting against rabies:

Discourage contact between pets and wildlife. Don’t let your pets roam, or at least keep them in clear view.

If you are scratched or bitten by any animal, wild or domestic, consult a physician immediately.

If your pet gets a suspected bite wound from an unknown animal or comes in direct contact with any wild animal, even if no wounds are evident, consult a veterinarian immediately. Your veterinarian may recommend a rabies booster.

Residents who see a potentially rabid animal or think there is an immediate public safety threat are urged to call Cambridge police at (617) 349-3300, while less-direct threats and other concerns should be brought to the attention of the commission. Messages should include the time and place of the sighting and a contact number.