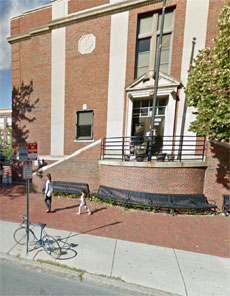 The Martin Luther King elementary school will start in September at its temporary home at 359 Broadway, but could move midyear. (Image: Google)

With the start of the academic year just more than a month away, plans are still uncertain for the four schools affected by the May 30 fire on the roof of a new school building at 100 Putnam Ave. The Sunday afternoon fire led to no injuries, but caused at least $5 million in damage and jettisoned plans to have the building done in time for occupancy this September.

The $95.5 million project will house two schools – the Martin Luther King elementary school and Putnam Avenue Upper School – in what the administration promises is a “state of the art” building. But instead the schools will start in the same temporary space they have been using the past two years – the King at the 359 Broadway building once used as swing space for the town library during renovations, and the upper school sharing space at the K-5 Kennedy Longfellow School.

The question is, when will they move?

It’s important also for the King Open School and Cambridge Street Upper School, whose shared building is being renovated next. Demolition of that building cannot begin until the two schools can move into the temporary spaces now taken up by the King and Putnam Avenue Upper School. Until then, they will stay in their current location, even though staff had begun readying for an expected summer move.

“No one person makes all of many decisions related to moving a school,” schools’ Chief Operating Officer Jim Maloney said Friday in an email. He stressed that district administrators want staff at all the affected schools to have input.

“With the news that the original moves would be delayed coming so close to the end of the school year, it was impossible to arrange the many meetings required to finalize new plans” before summer started, Maloney said, continuing:

“We did meet with the four impacted principals and were able to have a voluntary staff meeting at one of the schools just before school closed for the summer. At the meeting with the principals a broad outline of moves was discussed that would allow for midyear moves at all four schools, but no final decisions were made or have been made. The principals and superintendent all felt strongly that details related to the moves needed to be finalized only after the input of the respective school communities.”

Mayor David Maher’s educational liaison, Alanna Mallon, agreed Thursday that it has been made more difficult to finalize plans because many school-based staff are not at work over the summer.

“Right now,” Maloney said, “the plan is to have a broad outline of the moves released to staff and families by early September.”

“Given that all four schools are linked by tight construction schedules,” Maloney continued, “and there is no desire to leave a new building empty or swing space buildings half-empty, midyear moves should be expected. By working with our teachers and principals we are confident that plans can be finalized that minimize the impact on teaching and learning.”

But Maloney said not doing a midyear move could jeopardize the September 2019 completion date for four years of renovation or reconstruction of the King Open at 850 Cambridge St. building. “Any delay in that project is likely to delay the next project planned for the Tobin/Vassal Lane Upper School, so in reality we are talking about construction schedules that impact six of our schools,” he said. “By working with our teachers and principals we are confident that plans can be finalized that minimize the impact on teaching and learning” of midyear moves.