‘The Second Mother’: Servant’s daughter arrives, and not behaving like a servant 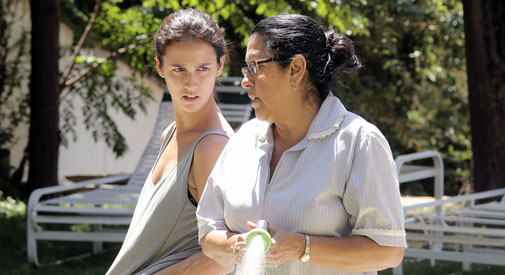 ‘The Second Mother’: Servant’s daughter arrives, and not behaving like a servant

Directed, starring, edited and written by women, the heartfelt and moving “The Second Mother” is a dedicated and affectionate look at motherhood and the lessons we learn from the women in our lives. Shot with still and controlled motions, lingering on the faces of characters and the emotions they experience, “The Second Mother” is an honest look at class discrepancies with a witty and loving script. 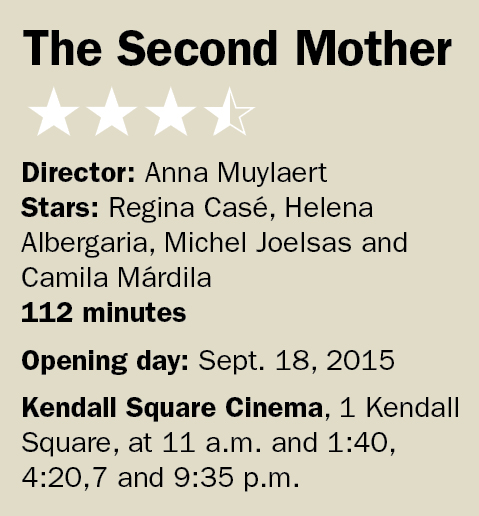 Val (Regina Casé) has been a hard-working housekeeper for an affluent family for more than 10 years before her estranged daughter, Jéssica (Camila Márdila) calls, wanting to stay with her until her entry exams to university. Once Jéssica arrives, Val must deal with a prideful daughter whom she barely knows who refuses to live by Val’s own rigid standards of living. She behaves more like a guest of the household, rather than its servant’s daughter. What the film does so well is make it so that even when we are annoyed by Jéssica’s antics and see the toll it takes on Val, Jéssica is never written to be the antagonist, and the script never lays judgment on either of the women’s decisions. Val’s rules aren’t Jéssica’s, and Jéssica is free-spirited in a way Val was never able to be. We admire Jéssica’s freedom but share in Val’s frustration at her daughter’s ignorance over what she has endured for the past decade.

Val is a beautiful character, and despite some rich supporting turns by Michel Joelsas as surrogate son Fabinho and Karine Teles’ empowered Barbara, this is a film that lives and breathes by its lead – and Casé’s Val is a knockout. Her face says so much in any given scene, whether it be an ecstatic grin as she wades in her employer’s pool, the slight crinkle in her forehead and downturned lips when she’s up late at night or a small, peaceful smile in the back of a moving car as she sticks her head only slightly out the window. Val is a character bursting with unconditional love for those she holds nearest to her, and while she can get bullheaded at times, she’s such a winsome character because of how deeply she cares for others, believes in her self-worth and optimism in life.

Written and directed by Anna Muylaert, the film takes on the structure of a play; characters walk in and out of scene, with many of the big moments happening in one setting. The camera hardly wavers, but despite a lack of kinetic style, Muylaert still manages to make something noteworthy of her directing, picking odd, slightly off-kilter angles for her characters. This, plus the stark settings of much of the household they live in – particularly a cold, white kitchen – makes for a fun offset to the lively characters of Jéssica, Fabinho and especially Val.

“The Second Mother” is a film with a heart, one that loves its characters and the story it tells. Val, with all the joy and emotions that come bursting from her in kisses, hugs and words of wisdom, is such a signifier for what Muylaert’s film is trying to be – and succeeding at. It’s a film about familial love and the struggles parents go through to provide for and protect their children, and it’s one of the sweetest films I’ve seen all year.