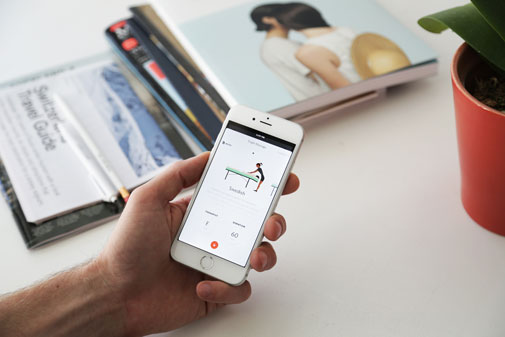 Aching bodies have an entirely new as of option today: summoning a message therapist to homes, hotels, workplaces and events through an app called Zeel.

Like other businesses joining the on-demand, app economy, Zeel specializes in nimbleness. A customer should be able to get a massage – Swedish, sports, deep tissue or prenatal, for couples, in a chair or portable table – as soon as an hour after booking, said Marcy Lerner, the company’s vice president of communications and partnerships.

“Most Zeel customers get their massages at home or in hotels,” Lerner said, “though we’ve done rooftops and even yachts.”

The company, launched in New York City in 2012, has more than 4,500 massage therapists clustered in nine areas with today’s addition of Greater Boston and tony Fairfield, Conn. The large concentration of massage therapists in Zeel coverage areas means the company should be able to provide service as early as 8 a.m. and as late as 10:30 p.m. seven days a week, 365 days a year – including holidays, Lerner said. It’s even possible to indicate a gender preference for a therapist.

One reason therapists are pleased to work with the app: On average, they gets 70 percent to 75 percent of the price of a massage, which is two to three times the average pay at a typical spa or salon, Lerner said. Just as the arrival of car services such as Uber has shaken up the taxi industry by convincing workers they can earn better pay with flexible hours, having Zeel in a region could change things for a mass employer such as Massage Envy Spa. That chain has about 1,000 locations nationwide, including one in Cambridge, where licensed massage therapists might earn around $17 an hour.

Tip included, an hourlong Zeel massage would cost $117 with tip. A massage therapist working through Zeel could net $88.

How does an established massage therapist feel about Zeel? Naomi Neustadt, whose Emerging Bodywork is based in Arlington and has extensive experience in Cambridge and Greater Boston, didn’t think signing up to accept work through the app would benefit an MT such as herself with therapeutic specialities and an established clientele. As an expert in modalities such as manual lymphatic drainage, craniosacral therapy and myofascial release, she found the experiences offered through the app to be too basic.

“Someone new” might value the app more, Neustadt said. “It can be hard to build a clientele, and this could be faster way to do that.”

A big concern was how the company vets customers, given that all too often men inexperienced with professional massage therapy think they’re going to be able to pay for a sexual experience – the infamous “happy ending.”

Booking through an app eliminates the chance for a massage therapist to talk to a customer by phone and assess whether they’re dealing with someone who’s uninformed or just a creep.

But Lerner said Zeel policies all but eliminate the chances for a massage therapist to feel uncomfortable or sexually harassed.

“We are very conscientious about this,” she said.

“Customers must book under their true identity due to Zeel’s high-tech ID verification solution. Additionally, customers verify their cellphone numbers, and pay entirely using credit cards – [and] clients looking for something other than professional massage services from a licensed professional typically are not interested in this sort of monitored transaction. Our therapists are always in touch with our customer service team and check in and check out.”

“Therapists working with us have peace of mind when traveling to clients because of our emphasis on safety,” Lerner said.

Neustadt acknowledged Zeel’s safety efforts and thought the app would be appealing to many massage therapists, and an easy sell to their potential customers. “It’s awesome having someone come to your house,” she said.

“Overall, I think there are enough clients out there for all of us,” Neustadt said. “So I think the innovation is great.”

A competing on-demand massage app called Soothe is in 14 regions, but not available in Greater Boston. Zeel could face some local competition from Mass Mobile Massage, a service dating back to 2010 that offers a wider variety of in-home massage starting from about $140 per session.