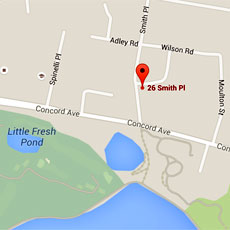 The Brookline man accused in a Jan. 28, 2009, workplace shooting in Cambridge has been found guilty of first-degree murder – again.

Clyde Howard, 71, was found guilty of first-degree murder Thursday for killing Maurice Ricketts, 33, of Malden, a co-worker at the Bay State Pool Supply warehouse on Smith Place, in the Cambridge Highlands neighborhood. Middlesex Superior Court Judge Brian Davis sentenced him to life in prison without the possibility of parole.

Howard had gone into work at about 10:15 a.m. with a gun, authorities said. After arguing with Ricketts – part of an ongoing personal dispute – he pulled it out and shot Ricketts multiple times before fleeing. Police arrived to find Ricketts outside the business suffering from multiple gunshot wounds, including two shots to the head. He was taken to Beth Israel Deaconess Hospital and pronounced dead.

Howard was found sleeping in a van in Roxbury about six hours later.

On Feb. 4, 2011, a Middlesex Superior Court jury found Howard guilty on the charges of first-degree murder, illegal possession of a firearm, illegal possession of ammunition and discharging a firearm within 500 feet of a dwelling, and he got his first sentence of life without the possibility of parole. But in October 2014, the Supreme Judicial Court overturned the murder conviction, noting that he’d invoked his right to remain silent during an interrogation.

As the Massachusetts Criminal Attorney Blog explained it:

It was apparent to the police that the defendant was impaired by alcohol.  Therefore, the officers decided not to question the defendant until the next day … The defendant initially waived his Miranda right to remain silent and talked to the officers for 45 minutes. However, he expressed reluctance about discussing “sensitive” matters. As the questioning progressed and the officers began to ask questions about the shooting, the defendant said he wanted to stop talking because “it [be]comes more intricate now and who knows what’s going to happen.” Instead of immediately discontinuing the interview, the Cambridge detective reminded the defendant that the crime had already occurred and was witnessed by multiple people. The interrogation continued and the defendant made damaging statements that were used against him at trial. Following his conviction for first-degree murder, the defendant appealed and argued that the trial judge should have suppressed the statements he made to the Cambridge detective.

The court “ruled that when viewed in context, it was clear that the defendant no longer wanted to proceed with the interview,” the blog says. “The trial judge should have allowed the defendant’s motion to suppress the statements he made after exercising his right to remain silent.”

Still, the Supreme Judicial Court left the prosecution the option of a retrial, and on Thursday Howard was again convicted of first-degree murder.

The verdict “reinforces our office’s mission to make sure that no one should feel that their life is endangered simply because they show up to work. No office dispute merits, or justifies, a violent and deadly response, and this case is confirmation that there are serious repercussions for those who seek to harm their work colleagues,” Middlesex District Attorney Marian Ryan said.