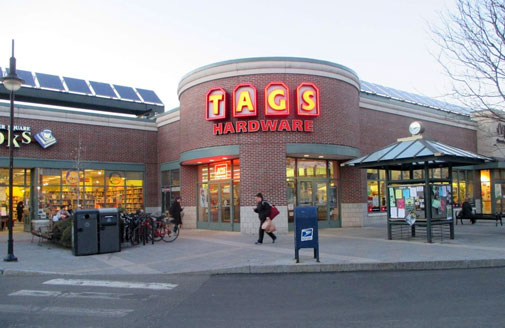 Tags Hardware has been operating in Porter Square since 1955. (Photo: Dodge S.)

Another longtime Cambridge business is passing out of family hands: Tags Hardware, the Porter Square mainstay founded in 1955 and run with enough diligence by the Shapiro family that the notorious black-and-white plaza portion of the Tags shopping center fronting on Massachusetts Avenue was named “Shapiro Plaza” by the city in 2006.

“The rumor out there is true. Mardi and I are going to retire and pass Tags to a new owner,” second-generation owner Simon Shapiro said in a Tuesday letter to the Porter Square Neighborhood Association, referring to his wife and co-owner, Margaret Moran. 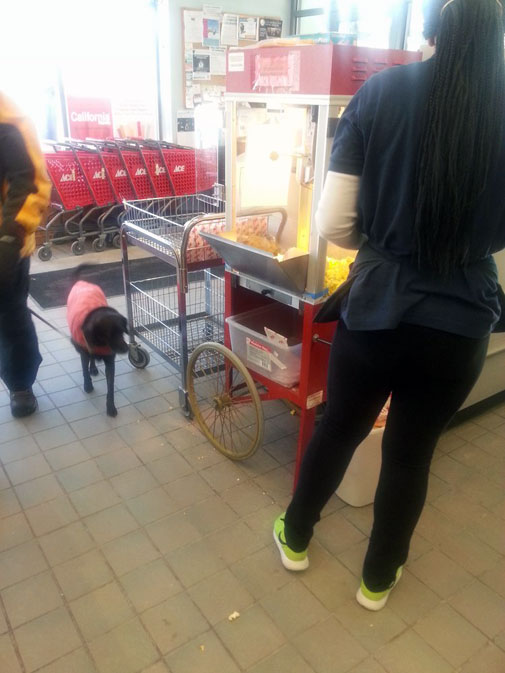 The owners of Tags introduced customer-friendly features such as popcorn, lollipops and biscuits for dogs in 1998. (Photo: Shirley E.)

The buyer is Acton resident Senneth Berrier, who runs other Ace Hardware stores in Westford, Acton and Newton, said Shapiro, calling the stores “very impressive” and a sign that Berrier “understands the importance of customer service.”

The owners have been doing due diligence with potential buyers for three years before choosing Berrier, Shapiro said.

Tags joins other Cambridge legacy businesses in being transitioned gently to new owners in recent years: Bob Slate Stationers had been on sale since 2009, already 78 years old, before the owners despaired of finding the perfect buyer and shut down their two city locations briefly in 2011 – prompting a sale to Harvard graduate Laura E. Donohue and a reopening in Harvard Square, where she worked “closely with Mallory and Justin Slate to create that signature Slate shopping experience.” Tags’ neighbor in the square, Porter Square Books, similarly changed hands two years ago without a blip after nine years in business; it was bought by a Cambridge couple who were longtime customers, Dina Mardell and David Sandberg. And after 65 years, the Cardullo’s gourmet shop in Harvard Square got License Commission approval in August to change owners in a months-long handoff.

Shapiro and Moran didn’t just carry on the family work at Tags, although that work included a 1998 revamp that added “environmentally correct and efficient HVAC systems, an elevator to ensure that there were no barriers for anyone and a host of embellishments to make your shopping experience productive and fun,” including popcorn, lollipops and dog biscuits for visitors. (In Shapiro’s words, “an addition to make you know just how pleased we are to have you come in for a simple fastener, a housewares gadget or just to talk.”) Shapiro and Moran were also active throughout the community.

Shapiro was a founding member of the Cambridge Arts Council and Cambridge Bicycle Committee, and was appointed to the founding board of Cambridge Community Television before the opening of its first studio. In 2005, he helped found Cambridge Local First, the city’s shop-local group.

The store’s Customer Appreciation Weekend, held Nov. 21-22 will be a chance for Shapiro and Moran to say goodbye and introduce Berrier “so that you may see why we think our succession plan will really benefit the neighborhood,” Shapiro said.

Still, he promised in his emailed letter, “This is not a complete goodbye. Mardi and I still live down the street and will continue to be dedicated to the continued integrity of our neighborhood.”

“We will miss the daily conversations with all of you as to what we are doing right and what might need tweaking,” he said, noting that even after decades as the boss, “I have even heard from a few who still claim that I am not running the store like my father.”