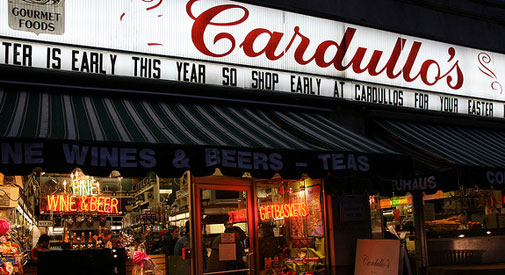 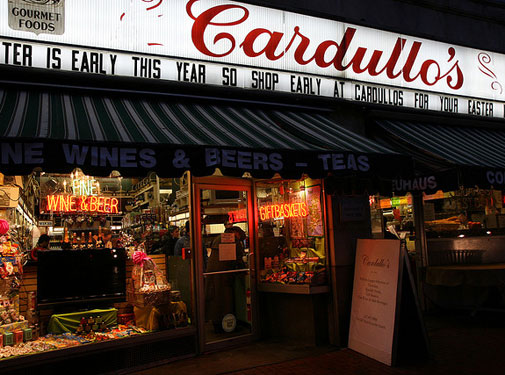 Cardullo’s, a Harvard Square institution since 1950, is expected to be sold this summer by the founding family.(Photo: Alex Barth)

After 65 years, there soon won’t be a Cardullo behind the counter of Cardullo’s. The Harvard Square institution is being sold to a couple fleeing big business to run a small gourmet shop, wine store and deli.

“We wanted to leave the corporate world,” said incoming manager Kim Wilson, most recently a marketer for Staples and partner at a management consultant. “And we wanted to continue this legacy in Harvard Square.” 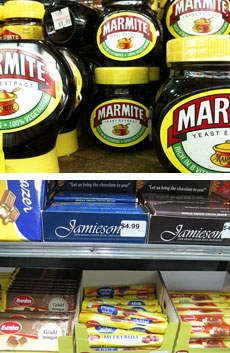 Cardullo’s is a destination and salvation for people seeking hard to find goods such as the yeast spread Marmite or chocolates from overseas. (Photos: mike spriggs, top; Matt, bottom)

The 6 Brattle St. shop was opened in 1950 by Frank N. Cardullo, an Italian immigrant who also owned the Wursthaus restaurant, and the family has run it ever since – now in a third generation with the death of Frances Cardullo in February 2009. The layout has grown less cramped in recent years, but the store is still a pricey delight for browsers of exotic chocolates, international foods and fine wines, and the deli still sells fresh, handmade sandwiches (including the $130 “Catherine the Great,” made with Sevruga caviar and Crème Fraiche on baguette). While the front-window television playing Red Sox games has been gone since 2010, feline employee Little Mister continues to provide entertainment inside.

Sisters and part owners Francesca Cardullo and Donez Cardullo-Tavilla have been in charge for six years, and it was Cardullo-Tavilla who attended Tuesday’s meeting of the License Commission to see through a sale process begun in October. With approval of the package store license by the state Alcoholic Beverages Control Commission, it is hoped the sale will go through in August at an estimated $775,000 for the store and another $100,000 in inventory.

The shop was valued at $1 million, Cardullo-Tavilla said, but this is a short sale from people who are both eager to get a break from the business and who found the Wilsons “absolutely the best … a family who will carry on a family business.”

Kim Wilson and husband Richard, who cited experience at BJ’s Wholesale Club and with food and grocery management in Dallas, even said their daughter would help out at the shop when she could. Staffing would stay at the same levels – about a dozen employees, full and part time, and more at the holidays, they said. Hours of operation would also stay the same.

It continues a good streak for Cambridge, with Porter Square Books and Bob Slate Stationers both passing gently out of a family’s hands in a way that keeps longtime customers content.

But she was looking forward to an easier schedule between the sale and the holidays without daily responsibilities at the gourmet shop and deli.

“I worked side by side with my father for 10 years, then took it on out of respect for my grandfather and dying father,” Cardullo-Tavilla said. (Frances Cardullo was born Francis Cardullo and transitioned in 2003.) “We made huge sacrifices. My sister and I both have children and husbands who work long hours. We’re just burned out.”

Letting the store go is “bittersweet,” she said. “It would have been more difficult, but to know it’s going to be carried on as my grandfather wanted it so many years ago is a blessing.”

After they were heard by the commission and won unanimous approval to transfer the package store license, the Wilsons and Cardullo-Tavilla hugged.