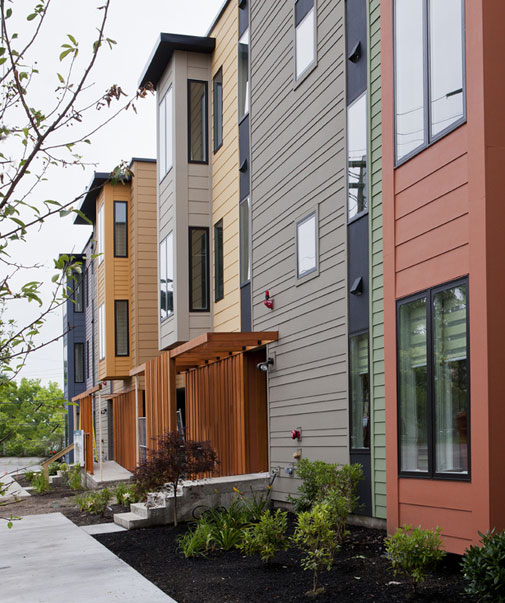 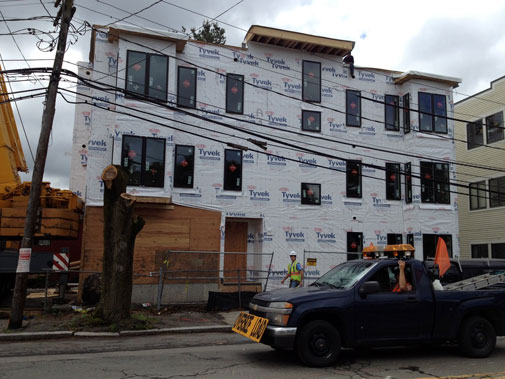 A five-unit residence at 42 Bay State Road under construction in May 2012. (Photos: AbodeZ)

The City of Cambridge backed away from a lawsuit over one small aspect of its affordable housing zoning requirements last month, when it settled a case pending before the Massachusetts Court of Appeals. In exchange for receiving $40,000, the city agreed not to require Dr. Ling Yi Liu to designate one out of his five units at 42 Bay State Road as affordable housing. Liu is a principal of AbodeZ (pronounced “abodes”), a Cambridge-based multifamily housing developer.

The city lost in the Massachusetts Land Court in May, but filed an appeal. As a result of the settlement, the appeal was withdrawn last month.

Normally the city’s inclusionary housing ordinance requires between 11.5 percent and 15 percent of housing units to be designated as affordable units, but only in projects that create 10 or more housing units. The developments at 42 Bay State Road and 54 Bay State Road, in Neighborhood 9 near Fresh Pond, are adjoining five-unit projects, and if they were counted together, would be required to provide one affordable housing unit.

The development opened as Bay State Corner in 2012.

In 2010, the sites were owned by partnerships with common owners. The partnerships “ran into difficulties,” according to the Land Court, and were sold to separate holding corporations with different owners, 42 BSR LLC (owned by Liu) and 54 BSR LLC. Both contracted with AbodeZ to develop the properties, and by August 2012 the buildings were complete.

In May 2013, the city’s Inspectional Services department became aware of the prior common ownership, and asked the owners to identify the one affordable unit within the 10 units. Liu and 42 BSR LLC appealed – first to the city’s Board of Zoning Appeals, which upheld Inspectional Services’ decision as it typically does – then to the Land Court. The court ruled in favor of Liu. (The adjacent owners, 54 BSR LLC, did not appeal.)

The basis for the appeal was the definition of a phased development project, which the language of the ordinance defined as “common ownership … for the 12 months immediately preceding the date of application.”  The common ownership terminated July 15, 2011, and the owners filed for a permit Sept. 12, 2011, just under two months later.

The city took the opportunity to change the language at the same time the City Council increased the affordable-housing “linkage” fee for big developers to $12 per square foot from $4.58. As of Sept. 28, the ordinance reads “within 12 months.”

The city’s commissioner of buildings, Ranjit Singanayagam, said he did not intend to pursue any action against the owners of 54 Bay State Road.

The owner of 54, Beth Fishman of the I. Fishman Family Limited Partnership, said it had not paid the city or agreed to settle, according to her attorney, Eleanor Uddo. The Fishman partnership bought 54 Bay State Road in June 2013, just as Liu was beginning litigation against the city.

Liu said he was happy he was able to reach the $40,000 settlement with the city, and that it was reached by “looking at what made sense.” The five-unit project at 42 Bay State Road is assessed at $2.2 million, so a single unit is worth about $425,000.

“From my perspective there was never any doubt that there wasn’t [an affordable] unit – that we didn’t fall under the inclusionary zoning,” he said.

While not speaking directly to the dollar figure, Liu suggested that the settlement approximated the cost he would have had to pay his Boston lawyers to defend against the lawsuit in the appeals court.

The city declined to comment on the settlement amount on Wednesday, saying only that it “remains committed to preserving and promoting affordable housing.”

Steve Cohen, an attorney, developer and affordable-housing advocate who sits on the Planning Board, said he thought “the reasoning of the court’s decision was sound and that the outcome was correct. … I think that the $40,000 settlement was extremely advantageous to the city. It seems clear to me that the only reason the defendants agreed to pay that sum was to avoid the substantial cost of another appeal by the city.”

But the city didn’t furnish the agreement until Oct. 8, one full week late.

And it charged $1.38 per page for the nine-page document, providing no explanation for its delay, but claiming the charge was for a city attorney to take 15 minutes to review the settlement agreement “to determine whether any redactions were necessary.” The document was furnished without redaction.