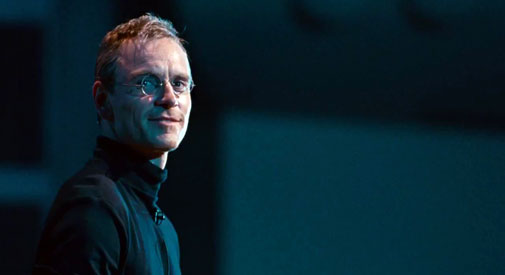 There was a fear walking into Danny Boyle’s newest release, “Steve Jobs,” that the film was going to be as calculated as the man it was based on. Aaron Sorkin being in charge of the script means a built-in package of monologuing, witty banter and spiels about what “men do” that, coupled with a three-act theater structure, creates a big risk for the film to feel icy cold. 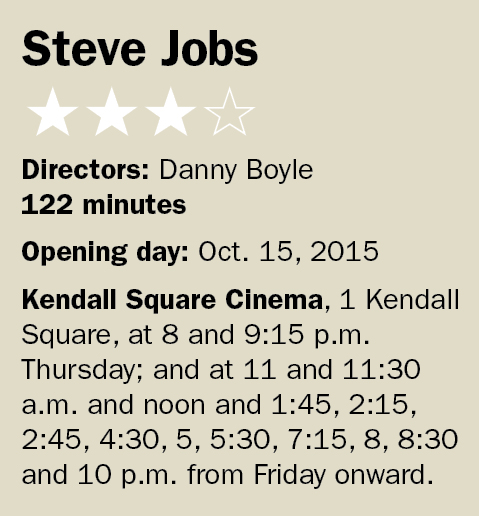 Luckily, that’s where Michael Fassbender comes in. Fassbender is at his domineering best as the man at the center of the digital revolution, breathing frenzied life into an already smart, tight screenplay.

The film manages to avoid the typical failings of biopics by centering on three monumental product launches, ending in 1998 with the unveiling of the iMac. In each sequence, Jobs speaks with and often argues with his peers and co-workers. Joanna Hoffman (Kate Winslet) is his right-hand woman and marketing executive, and one of the few people in step with the prickly genius at all times. Seth Rogen plays the film’s moral center, Jobs’ longtime friend and partner Steve Wozniak, who is perpetually looking for Jobs to acknowledge his contribution to Apple’s success. Andy Hertzfeld (Michael Stuhlbarg) drifts in and out of focus as one of Apple’s main technicians and friend of Jobs’ one-time girlfriend Chrisann (Katherine Waterston), who gave birth to Jobs’ daughter (played by Makenzie Moss, Ripley Sobo and Perla Haney-Jardine respectively), even if he doesn’t want to admit she’s his. While it’s Jobs’ relationship with his daughter that is developed the most and treated to moments of real payoff, it’s the time with former Apple CEO John Scully (Jeff Daniels) that stands out, as we’re never able to gauge the exact nature of a father-son relationship that drastically shifts in power dynamics each time we see them together.

The acting is superb across the board. Winslet is strong throughout, matching Fassbender’s pace note for note, while Rogen is given a softer role than usual – and has one of the best scenes of the film as he silences a crowd with his proclamation Jobs could be a decent person and a gifted one at the same time. Daniels at first seemed to offer little more than a retread of his Will McAvoy character from “The Newsroom,” and not much happened aside from a second-act argument between Scully and Fassbender that changed that. But he handles Sorkin’s dialogue with ease, and it’s nice to see him in a role of this caliber that isn’t in the doomed HBO series.

Fassbender is uncontested as the star of this film, though, sharing lively rapport with every performer he goes up against and showcasing an energy that other roles haven’t asked of him. He’s thinking of the big picture at all times, of how he can sell his product and make genuine art out of metal, wiring and hard drives. He is captivating as Jobs, so much so that even when he treats his daughter terribly at the start of the film or threatens his employees with a venomous lack of empathy, we’re still waiting and hoping for him to be redeemed. Fassbender’s presence is naturally compelling, and it was difficult not to love watching him act, even with Sorkin’s biting and uncompromising script driving home Jobs’ many faults.

Boyle is the one player who takes a back seat in his latest release, letting Sorkin’s dialogue and the actors’ energy take center stage over the directorial flourishes that accompany his best works. The film looks great, and the three-act structure does wonders for the overall pacing, with the fact that all three take place on literal stages. It gives the film a fun, theatrical element, but there’s nothing that makes me think “Boyle” when I watch. There’s maybe one of two passing scenes that shine with his typical, frantic cuts, but they are brief. He seemed happy enough to focus all attention to what was happening in front of the camera and guide the actors from Point A to Point B.

With a focus as sharp as its protagonist with none of the chill, “Steve Jobs” is a film that’s unafraid to paint an icon with a gray brush, all the while celebrating the products he was able to create and the future Jobs worked toward. It’s an immensely successful film, and a story worthy of its subject.