Historic building on Magazine Beach yours, with break in rent, if state likes the concept 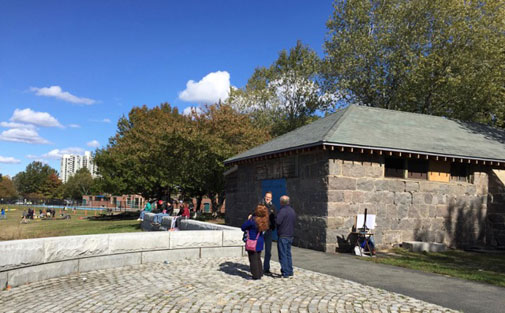 Historic building on Magazine Beach yours, with break in rent, if state likes the concept

The Powder Magazine building at Magazine Beach in Cambridgeport has received more than $500,000 in rehabilitation and repair in recent years.

The Powder Magazine building at Magazine Beach has been a few things since 1818 – an ammunition storage depot, a bathhouse and park storage building – and the state Department of Conservation and Recreation is willing to hear any idea about what it should be next.

The state isn’t calling for formal proposals just yet. Its Request for Expressions of Interest is a looser process meant to present the property to the public, gauge general interest in the opportunity and collect information to guide the next step: a more formal Request for Proposals.

“The purpose is to collect and identify parties interested in the unique opportunity to be a part of the next chapter in the long and rich history of this historically significant property,” said Kevin O’Shea, a spokesman for the DCR, in a press release.

A partnership with the state could be either through a short-term permit lasting up to 10 years or a longer-term lease in a Historic Curatorship Program model used nationally and statewide. “The program has resulted in very successful partnerships at other locations throughout the state, most recently at [Boston’s] Maudslay State Park,” the press release said, noting that 19 state properties have been rehabilitated or are under rehabilitation through the program, with more than $16 million in private funds leveraged toward long-term preservation – because the program works by taking underutilized but historically significant properties and partnering with outside partners who exchange rehabilitation, management and maintenance toward fair-market rent.

Over the past few years, the state, with matching grant funding from the city and Cambridgeport Neighborhood Association, has invested more than $500,000 in rehabilitation and repair of the Powder Magazine’s roof, masonry walls, windows and doors.

“The Powder Magazine Building is an important part of the history of the commonwealth, the city of Cambridge and the Charles River Basin,” DCR Commissioner Carol Sanchez said. “By partnering with an outside party, DCR will ensure that the building is preserved and reconnected to the community for years to come.”

Work on the surrounding park goes on separately, with a public meeting about the design for its western part – ideally set by the end of the year, with implementation in 2016, said Cathie Zusy, chairwoman of the association and its Magazine Beach Committee – planned for 6:30 to 8 p.m. Nov. 18 in the auditorium of the Morse School, 40 Granite St.

But no matter how nice the park will be, Zusy said, “We need a great lessee for the Powder Magazine.”

An open house from noon to 2 p.m. Nov. 7 allows a look at the property. Those interested in attending should RSVP here. The next step would be a response to the state, due by by 3 p.m. Dec. 9.

For paper copies or information on the program, send email to HCP.Requests@state.ma.us, call (617) 626-1361 or write to the Historic Curatorship Program at the Department of Conservation and Recreation on the seventh floor of 251 Causeway St., Boston MA 02114.