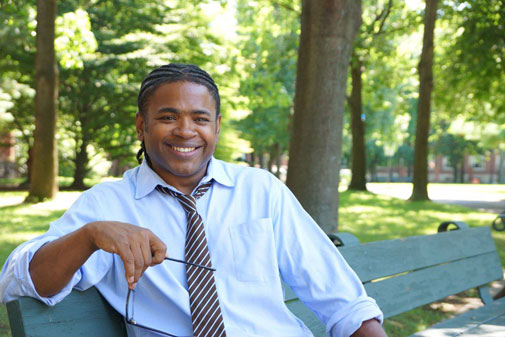 Mervan Osborne, seen in a campaign photo, opted not to run for reelection to the School Committee after buying a home in Milton.

School Committee member Mervan Osborne has been keeping two residences since the purchase of a house in Milton in early December. Elected officials must be city residents, and to some Osborne’s actions have a smell of impropriety, but Osborne said he took steps to ensure his work on the committee was approved and ethical.

Though Osborne, his wife and their two young children moved near the beginning of the year, Osborne said he has maintained a rented unit in Cambridge while doing committee work and voting on district issues.

“My intent was always to make sure that everything was aboveboard – to do this in the full light of day,” Osborne told Cambridge Day. He said he talked with some members of the school department administration, including Superintendent Jeffrey Young, when the Milton house became an option and was told to seek guidance from city solicitor Nancy Glowa and Glenn Koocher, executive director of the Massachusetts Association of School Committees. Osborne said he felt assured by these conversations that he was doing nothing improper.

He did not think to consult the Election Commission, he said, because no one suggested it, including, he said, Glowa. A call to Glowa was returned Friday, but beyond confirming that she spoke with Osborne “several months ago,” the city solicitor said she was unable to say much. “I can also say that in general any elected official who is unsure of his or her situation is always welcome to contact the Election Commission for clarity,” she said.

“I don’t know anything specific about Mervan’s situation,” Koocher said, “but I told him what I know: While you may have several residences, you may have only one domicile. And the domicile is where you declare it to be. It is where you vote. You vote from your domicile, not from your residence.”

Koocher, a Cambridge School Committee member himself from 1974 to 1985, said this ruling comes from case law, including a case many years ago in which a Cambridge election commissioner tried to block a candidate for local office because he had three residences in three towns. Koocher said the commission voted 4-0 in favor of the candidate, citing his choice of Cambridge as his domicile as reason for the decision.

Osborne says that he is voting this year in Cambridge, and that he gets his mail at the Cambridge address where he is renting space. He said he is renting an apartment recently vacated in the house of his old neighbors, who are also “very dear friends.”

“Look, this is not something that people don’t know about. My Cambridge neighbors know. We have many friends in Cambridge who know. Some have been to the [Milton] house,” Osborne said. He said especially wanted the apartment to be available for this year’s intense work of the School Committee, such as a search for a new superintendent that ended Tuesday.

Asked about a “homesteading affidavit” he signed when securing the mortgage for the Milton house, Osborne said, “it never crossed my mind” it could be a problem. Although it determines the Milton home as the “principal residence” of Osborne, his wife or both, Osborne said that to him it just seemed like a document underlining the purchase of a home as a residence, not as a place to turn around and rent it out.

Osborne recounted the difficulties he and his wife faced in finding housing in Cambridge. When the owners of the unit they were renting gave warning almost two years ago that the couple would have to move at the end of the lease, Osborne and his wife began looking for a home to buy. When they did not find one in time, they rented another, smaller space, thinking it would give them time.

“It was miserable. We had one small child and then the baby. We had to put most of our stuff in storage, at great cost. We were desperate to find a home. We were washing the baby in a storage container,” he said, calling the last apartment unsuitable.

Making the final decision to buy outside of Cambridge was “wrenching,” he said. He and his wife felt strong connections to Cambridge, he said, and felt “kind of embarrassed about” having to move out. But they ultimately felt that they couldn’t find anything in Cambridge that “suited their needs at a reasonable price.”

The deed on the Milton house was signed Nov. 7, and the declaration is dated Dec. 5.

“I love the work”

About his decision to stay on the School Committee, Osborne said that there were two issues driving him: first, he felt he had received clearance that staying on the committee did not violate any laws or ethics; and, second, “I just really love the work.”

“I was very involved in the budget work,” Osborne said. And I felt that the relationship that our group [of committee members] had built this past year, in the second half of the term, was really, really strong. I love doing the work, going into schools, meeting the teachers and the students. I just felt that I had to finish the job.”

Not all of his fellow committee members knew of his move, and he didn’t raise it publicly as a reason for not running for reelection when it came time to declare over the summer. “I wasn’t intending to make any announcement at all … I hadn’t pulled papers, so it was obvious. But Fred thought maybe I should,” Osborne said, referring to committee vice chairman Fred Fantini. “I wasn’t hiding anything. People knew.”

Osborne said he also worried that his leaving midterm would force the city into a special election, but he is uncertain today who told him that. Cambridge’s proportional representation form of voting, though, makes it easier to find the next-ranked replacement by returning to the original votes.