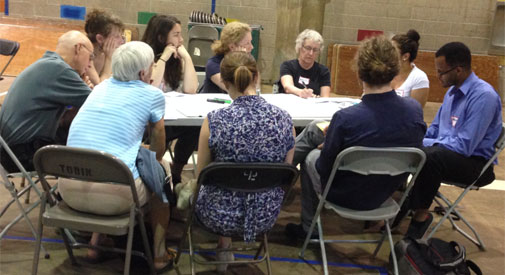 A citywide development master plan got its $3.3 million in funding Monday, after a two-week delay brought on by a skeptical, cost-conscious city councillor and a roundtable discussion in which city staff tried to allay his concerns.

The 8-1 approval of the money means the city can sign a contract with the consultant Utile and officially start the master plan process, starting with vital but less consequential steps as crowdsourcing a master plan name and, within six months, turning attention to uneven development in the Alewife neighborhood. 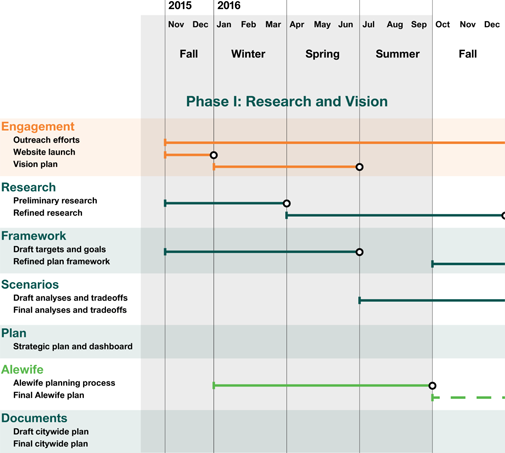 The consultant Utile has mapped out a three-year process for a citywide master plan. Click to go to its Oct. 26 roundtable presentation.

“I already know what the results are going to be … I could probably write this report right now and save $6 million,” said councillor Tim Toomey, explaining his opposition to the plan and using the figure he expected the plan to cost by the end. “I just don’t know what you’re going to prove at the end of the day. We’ve had so many studies over the past couple of years, and I don’t see how this is going to be different.”

At the Oct. 19 council meeting, Toomey froze master plan funding in anticipation of last week’s roundtable discussion of it, where he grilled city managers and planning staff about ballooning costs, eliciting assurances that the three-year process was carefully budgeted and that there would no spending without explicit council approval.

Despite the intensive, two-hour roundtable devoted solely to questions about the scope, implementation and funding of the master plan process, Toomey wasn’t the only councillor with persistent worries. Councillor Leland Cheung joined Toomey in fretting, despite expressing excitement about the plan overall.

“If they came in and said it’s going to be $6 million, okay, that’s one thing, I just don’t want to be told it’s $3 million and be told a little bit down the line it’s going to be another $3 million. It would be nice if the city manager could give us stronger assurances around that,” Cheung said.

As the conversation became circular, with expressions of concern alternating with expressions of excitement, confidence and impatience before leading to the next expression of concern, at one point Cheung confessed he was killing time in the hopes the city manager would still be in the building, despite ending his formal role in the meeting earlier, and return to answer questions similar to those he answered at the previous week’s roundtable.

Councillor Nadeem Mazen made repeated attempts to bring the conversation to a close with a roll call vote for the funding, but each time other councillors signaled their wish to speak.

“All I know is that every day people come to my office about affordable housing units, employment opportunities and the school system, and I truly believe that $6 million dollars should be spent on those resources and not on another study,” Toomey said, repeating comments from the roundtable that East Cambridge residents had completed a neighborhood plan that cost the city nothing, and expressing doubts that the Utile study would ever correct an imbalance that put more affordable housing in East Cambridge than in much of the rest of the city. “I fear at the end of this we’re going to see other neighborhoods not step up to play their role in supporting an economic distribution for affordable housing in this city … it ain’t going to happen.”

It was councillor Dennis Carlone’s turn to repeat a point from the roundtable: That the $3.3 million over three years was about 0.3 of 1 percent of the city’s annual budget. He added that the contract was no different that any other contract the city entered into, and that the degree of scrutiny this expenditure was getting was surprising in light of many other, much larger expenditures.

“This is minuscule, and it’s more about fulfilling our promise. Quite frankly, and I’m sure all of you have heard this, I keep hearing, ‘When is the master plan starting?’ And I maybe lied, I said, ‘This month,’” Carlone said. “But I thought it was starting this month. We’ve gone 99 percent of the way.”

Councillor Craig Kelley had his own theme to repeat from the roundtable: He didn’t care if the master plan wound up costing more than the $3.3 million, because the city needed planning for the next two decades or more. Mayor David Maher said he understood where Toomey’s “cynicism” came from, but that the city needed to be united for the process.

Cheung said he knew the matter would pass with enthusiasm and even supported it, but moved to table it anyway to extract further promises from the city manager. Only Cheung and Toomey supported the motion to table the master plan funding; E. Denise Simmons voted “present.”

When a vote finally came on the $3.3 million, Toomey was the only vote against it.