‘Spotlight’: Trip into darkest church scandal benefits from telling the truth, as we all did 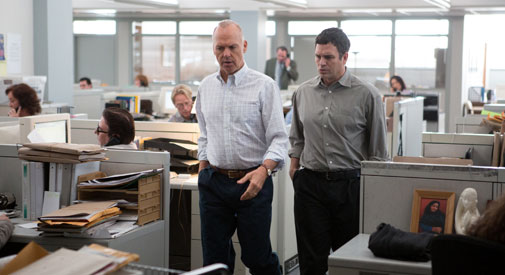 ‘Spotlight’: Trip into darkest church scandal benefits from telling the truth, as we all did

“Spotlight” is a rare journey into cinematic journalism that gets at the heart of its investigators’ subject without grandstanding the personalities or personal lives of those doing the poking around. Like eternal classic “All the President’s Men” and David Fincher’s weave around the notorious San Francisco killer in “Zodiac,” “Spotlight” covers painful and well documented history and, despite the inherent anticlimax of knowing how it ends, is rife with intrigue, embedding the viewer with those unearthing the unseemly truths, learning alongside them as the moment unfolds. The simple and earnest approach casts a sympathetic (but never maudlin) light on the victims of clergy pedophilia in Boston during the 1980s and 1990s with a subtle poignancy that wells to a roar of release. 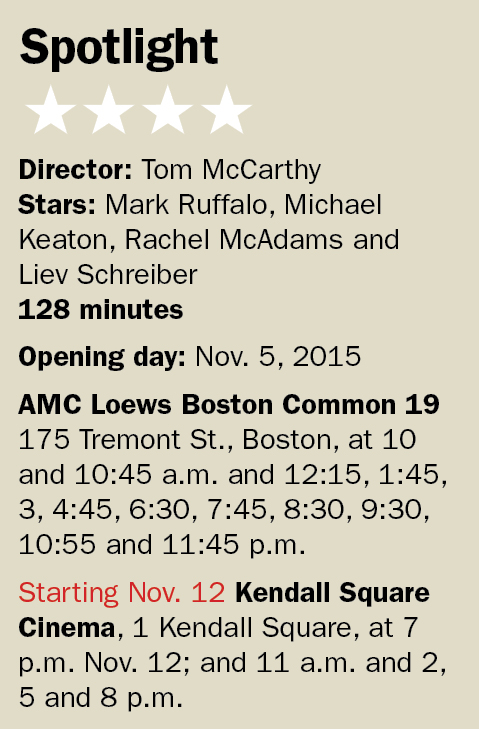 At the center of “Spotlight” (much like “Black Mass,” the true-life take on gangster Whitey Bulger that takes place roughly at the same time) looms the tribal, nepotistic nature of changing Boston, where hush-hush in the dawning age of the Internet is accomplished easily with money, strong-arm tactics and preying on the weak and underprivileged. It feels a long way from the gentrified cityscape of today, home to many a one-percenter and a hard place to make rent on a working-class salary. But it was boys and girls from those vanishing blue-collar neighborhoods that were marked by pedophile priests late in the last century, many from broken homes without a stable male figure and riddled with substance abuse.

A few of these priests (Fathers Geoghan and Porter) made the news in the mid-1980s, but were considered one-offs. That’s the start of “Spotlight,” named after The Boston Globe investigative team that operates autonomously and with need-to-know access: as the terrible barb of a scandal and coverup that marred many lives and stained the reputation of the Catholic Church gets painfully brought out into the light.

As the film has it, even cagey Spotlight team editor Walter “Robby” Robinson (Michael Keaton) isn’t considering a swing at the venerated church. Like many Bostonians he’s in too deep – raised Catholic, went to a Catholic high school across the street from the Globe. It’s not until the prodding of new managing editor Marty Baron (Liev Schreiber), a solemn Jew up from Miami, that Robby and his team become dogged pursuers of the truth, willing to go up against the iconic institution of their rearing, still fortified by money, reach and power.

Director and co-writer Todd McCarthy, who’s had great success plumbing the heart of everyday human drama with “The Station Agent” and “The Visitor,” navigates the gantlet of portraying victimization without vilifying the church (which was aware of the abuses by nearly 100 clergy and systematically paid off the victims and rotated the priests to other parishes). In the end there are no winners, just a soulful cleansing and a record set straight. The most haunting scenes come when Robby’s ace reporters (Rachel McAdams, playing effectively against her natural beauty; Mark Ruffalo; and Brian d’Arcy James, who gives the film’s most subtle and genuine performance) sit down with a few of the victims (excellent supporting work by Neal Huff,  Jimmy LeBlanc and particularly Michael Cyril Creighton as a closeted gay from the hardscrabble streets of Dorchester) who recap their trust, uneasy compliance to authority and post-traumatic scars.

In the wake of his “Birdman” rejuvenation, it’s Keaton as the dutiful editor who carries the film, but overall “Spotlight” is more of an ensemble piece that never leans heavy – except a slight list when Ruffalo’s reporter gets up on the bully pulpit a bit too long and practically out of character – and always stays true to the eye of the investigative profession and outwardly rippling plight of the victims. There’s much power in what it doesn’t try to do.

Essential players such as Stanley Tucci’s attorney, trying to bring a mass suit against the church, a slick Billy Crudup as the other attorney with seemingly conflicting agendas and John Slattery as Robby’s higher-up deepen the tragic folly of arrogance, abuse and corruption. In the end, it’s about truth and reckoning and the prospect of a modicum of vindication for those broken and tormented who have survived. It’s amazing the authenticity with which New Jersey boy McCarthy and co-writer Josh Singer have imbued the film.  The clergy sex abuse scandal broke in Boston and became the first domino to fall in what would become a national and international revelation of crime and coverup. “Spotlight” rides the crown of that teetering first block with the viewer uneasily perched and looking out at the ever-growing trail of blackness.