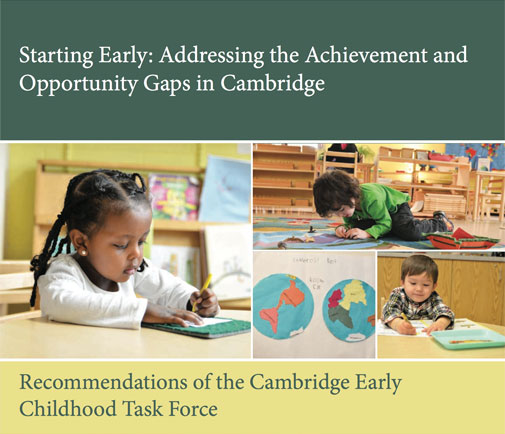 Work on the recommendations of the Early Childhood Task Force is to start almost immediately, spending $190,000 in what remains of the current fiscal year to get started on turning its report into a strategic plan, hiring two people to lead it, answering the questions already raised and developing a pilot project.

But that wasn’t soon enough, city councillor Leland Cheung said toward the end of a Monday roundtable with the School Committee where the plan was presented.

“I’m very frustrated, I’m very disappointed – and I’m kind of bored. When we sent people off, I was hoping these questions would come back answered,” Cheung said. “These are all good questions we’re going to study, but I want the questions answered. We’re talking about programs, and philosophy and education and curriculum, and parents are like, ‘When’s pickup and when’s drop-off?’”

The task force hopes to get all children in the JK-3 grades on the same level of preparation to learn, whether they’re in a program run by the city, Head Start, a church or other organization – based on what public schools Superintendent Jeffrey Young presented as a cliched truth that those are the years children “learn to read, and then they read to learn. And if you’re not a proficient reader by the third grade, it’s going to be hard to read to learn.”

The plan outlined by the task force and City Manager Richard C. Rossi was to spend $1.3 million in the coming fiscal year and $2.3 million in the 2018 fiscal year to “strengthen those programs across the board, [assessing] their needs so everybody gets trained and everybody gets the additional resources so everybody is going to have their children, no matter what program they’re in in the city, start off equally and move together equally.”

The report is here:

Rossi said he initially expected to ask for money for a single building in which early childhood education would be centered in the city, and still expects there will be such a request at some point – but not within the next few years.

“This is not going to be something where in three years we will have the instant solution,” Rossi said, comparing the program to the growth of the city’s Baby University program and promising annual confirmation and approval of Early Childhood benchmarks. “I know we will incrementally grow this to success.”

Slow to be acted on

The issue goes back years. Marc McGovern, a School Committee member who is now a councillor, and Marjorie Decker, a councillor who is now a state representative, were appointed by Mayor David Maher in 2010 to lead a blue ribbon commission on the topic that issued a report in October 2011. Another two years later, in September 2013, an earlier council and committee roundtable asked for the task force, which worked for 15 months to produce the report heard Monday.

Cheung said there was time left in the current budget process for the officials working on implementing early childhood education to figure out a faster timeline. “There are proven pilots and we know how to reach kids,” he said. “I want us just to move.”

“We’re in the budget process. Tell me what it’s going to cost for early childhood education for every single kid,” Cheung said. “We just approved half a billion dollars in [school] space, I know we can find space … go figure out what the number is, come back and tell me and we’ll grapple with that number.”

He was not the first councillor to call for faster action. In June 2013, McGovern issued a call for universal pre-K enrollment by September 2014 and Decker was livid at the pace set by Rossi and Young when that wasn’t achieved.

Councillor Dennis Carlone said research during the recent election season showed Cantabrigians were willing to pay more taxes to fund early childhood education. He expressed milder surprise than Cheung earlier in the meeting that there remained questions to be answered.

There were also sharp questions from councillor E. Denise Simmons on the initiative’s slow start and a wish to see benchmarks in place at launch, rather than to see the remainder of the current fiscal year spent determining those questions – what a task force consultant called the final 25 percent of the work needed for an integrated plan.

“I’m not sure how we alter the timeline. We still have to hire a director and develop a strategic plan and governance,”  Peterson said. “I think we’re certainly hearing urgency.”