How winning votes flowed in this election, and what it means for ‘slate’ campaigning 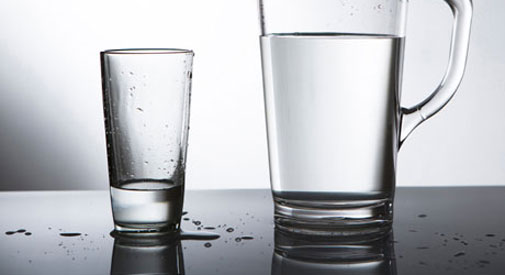 How winning votes flowed in this election, and what it means for ‘slate’ campaigning

If only everyone voted the way we do in municipal elections. Voting is simple: We rank the candidates in order of preference on our ballots. Counting is not so simple. We use a counting method called the Single Transferable Vote, a method only a nerd could love. The results, however, reflect the will of the voters fairly and accurately, and it’s a pity more elected positions aren’t determined using a form of Proportional Representation.

The STV count used to be a little easier to understand because you could actually witness it over several days in a public school gym. You could physically see individual ballots flow from one candidate’s pile into another’s. Now it happens inside a computer so the unofficial results are available just hours after the polls close on Election Day.

There were 17,854 valid ballots for the nine-seat City Council race this year. Imagine they are represented by a big pitcher of water. Now imagine 24 empty glasses, one for each candidate and an extra for write-in votes. Each glass, if filled to the brim, represents a tenth of the volume of water (plus a drop or two) in that pitcher. This year, that number – known as the quota needed to get elected – was 1,786. 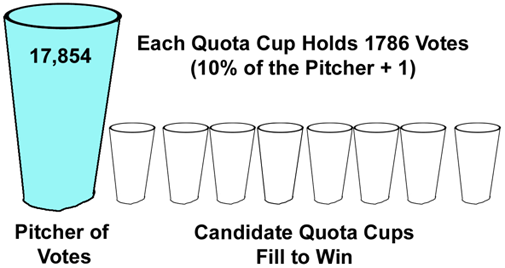 In the initial round, the water in the pitcher is distributed in proportion to No. 1-ranked votes. If your glass is full in any round, you’re a newly elected city councillor and any spillage is distributed to other candidate’s glasses based upon the voter’s ranked preference. And until only nine glasses remain, if you have less water than anyone else, you are eliminated and your water is distributed to the other remaining candidates based on the voter’s next-ranked preference – their No. 2 vote, say.  If the voter had no remaining preferences the ballot goes into a special “exhausted” ballot glass and is not counted toward anybody’s total.

So how did the water flow this year? This year was different because some candidates aligned themselves into groups called slates, including seven incumbent councillors who declared themselves the Unity Slate. The rest, by and large, disagreed with the Slate’s priorities.

The value of a slate in a ranked, STV election is that when your glass overflows, most will overflow into your slate’s other glasses. If you are eliminated, it should also flow into the slate’s glasses. The only catch is that the voters have to give the slate enough water to fill all of their glasses.

The trend for Unity Slate candidates over the past three elections did not look good. In the 2011 election, Unity Slate candidates (or their mentors, such as now state Rep. Marjorie Decker standing in for first-term councillor Marc McGovern) held 78 percent of the first-round votes. In 2013, their share dropped to 60 percent. In 2015, it continued downward to 56 percent. 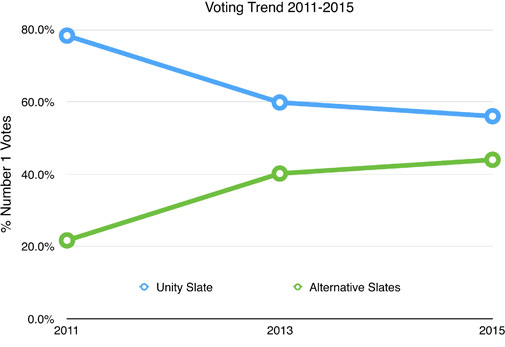 This year, there was barely enough water in the Unity Slate glasses to support the election of five of the seven on the slate. The only question was who would be eliminated and who would replace them.

The glass representing Nadeem Mazen (an incumbent with his own “Slate for Cambridge”) overflowed at the very start, and most of his excess water filled the glasses of non-Unity Slate candidates. There were 10 other candidates with glasses more than half full, each with a good chance of being elected. Challenger Jan Devereaux looked particularly strong, her glass three-quarters full from the start. Unity Slate members Leland Cheung (the top vote getter in the 2011 and 2013 elections) and Dennis Benzan (a first-term councillor with a very strong showing in 2013) had oddly empty glasses this time around. 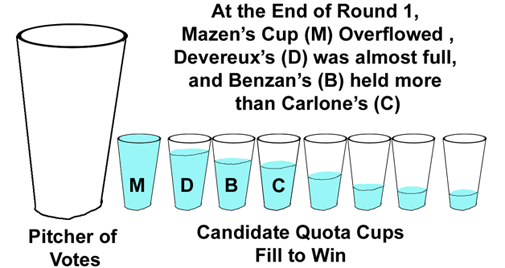 One after one, as the lower glasses were eliminated, the majority of excess votes flowed into the glasses of non-Unity Slate candidates. A slower, but measurable trickle of votes filled the Unity Slate glasses from non-Unity candidates. As it happens, Cambridge voters do rank candidates for reasons other than membership in a slate – identity politics and neighborhood loyalty frequently eclipse the grouping. One thing was clear: The glasses of Dennis Carlone (an incumbent on a sort of informal slate with Devereux) and Minka vanBeuzekom (running independently) were filling quickly, while Benzan’s and Cheung’s were not. 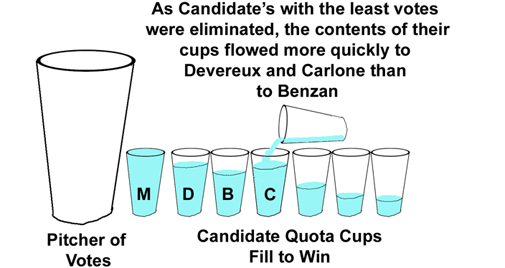 Whether it was identity politics or neighborhood loyalty or some other factor, Cheung got an unexpected boost from another candidate on a competing slate, Mariko Davidson. Cheung’s glass was now nearly full and it was down to vanBeuzekom, Carlone and Benzan, with Carlone comfortably ahead. It turns out it didn’t matter who was eliminated first. Carlone was preferred by vanBeuzekom and Benzan voters. Benzan and vanBeuzekom were out. 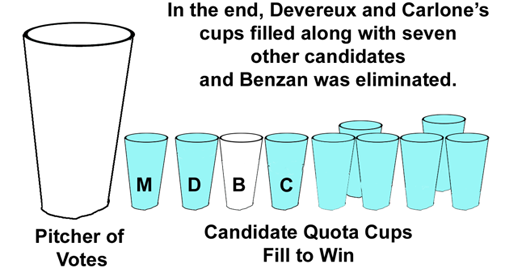 And if it weren’t for the Davidson bump, Cheung may have been eliminated instead of Benzan. As it is, the Unity Slate lost considerable support from the voters. If the trend continues, they will continue to lose seats to alternative candidates.

Tom Stohlman is a Massachusetts Institute of Technology graduate and Cambridge architect and planner who identifies himself as a “failed candidate for Cambridge City Council (2009 and 2011).”