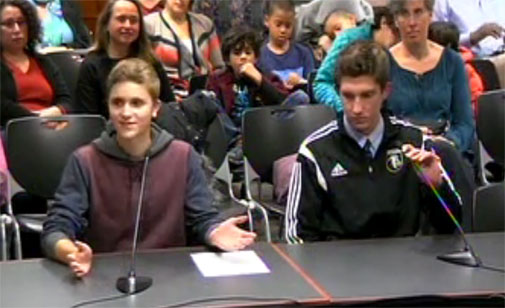 Cambridge Rindge and Latin School students Liam Greenwell and Tomek Maciak talk Nov. 19 about the need for more funding for the school newspaper, The Register Forum.

“I have just two words for you,” Vassal Lane Upper School parent Judy Weiss told the committee early in the evening: “Family liaisons. We are now in year four of the upper schools and I still am flabbergasted that the middle schools were created without a solid and workable plan for family engagement.” Noting that middle school families have fewer reasons than elementary school families to come to the school regularly, she said it’s almost impossible to engage families. With new restrictions limiting volunteer access to family email addresses and the absence of family directories, “how are we supposed to get in touch?” Vassal’s high concentration of families new to the area – it houses all the sheltered English immersion population – makes family outreach particularly important, she said.

The consequence, she added, is many fewer community events, with one notable Vassal event taking place only because the teachers “stepped in to organize it.”

Parents Mary-Ann Matyas, Christina Lively and Betsy Chase added support in their comments for family liaisons, with Chase advocating that, at the very least, if the existing clerks are being asked to take on family liaison responsibilities they should be paid for the additional job, and Lively asking for elementary school family liaison part-time hours to be expanded. Matyas joined Weiss in asking for more support for middle school after-school activities. “It’s a joke,” said Weiss, pressed for time in her final seconds at the microphone. “There is nothing.”

Matyas expounded. “I only recently found out,” she said, “that each school is responsible for creating their own programming and recruiting teachers.” She named this as partly explaining the “uneven” programming across semesters and across schools and pleaded for a better system.

Pia Cisternino, a recent candidate for School Committee, joined Miranda Pearce, Stephanie Groll and Eric Yablonowitz in asking that elementary schools double recess time to 40 minutes from 20 minutes. Citing research by the American Academy of Pediatrics and others on the importance of unstructured outside play time for improving student focus, social and emotional health and academic achievement, the four parents asked that next year’s budget eliminate any financial barriers to extending recess.

Pearce said Belmont and Lexington each have 35 minutes of daily recess within the same 30 hours of weekly school as Cambridge. Somerville and Brookline, she said, “have slightly longer days but twice as much recess,” asserting also that many Cambridge children don’t actually get the full 20 minutes they are allotted (echoing regular parent complaints that the time includes dressing, undressing and moving through the school – and that recess is often withheld for punishment despite School Committee policy that this is unacceptable).

Students from Cambridge Rindge and Latin high school pleaded for more support for school clubs. Liam Greenwell and Tomek Maciak from school newspaper The Register Forum asked for more money to allow the printing of more than 500 copies – which are snatched up immediately, they said, by the far larger student body – and to develop projects such as a website and “reaching out to the middle schools.” Pushed by member Fred Fantini for “a number,” they said they would like to double the budget to $9,000.

Students Isabella Gray and William MacArthur spoke on behalf of Club Four, which provides meals three nights a week for the Harvard Square Homeless Shelter, now expanded to include the youth Y2Y shelter. “We currently receive zero dollars,” said Gray, who is co-president with MacArthur. “We would like to expand that.” They said that the club now is the largest in the school, with 150 volunteers, and is “one of the most expensive clubs at CRLS.” They have raised and spent $3,840, MacArthur said, but it is “getting harder and harder each year to raise funds” because of the explosion of clubs at the school. He asked for $1,920 in the budget, which he calculates as one-third of the club’s operating budget. They echoed Greenwell and Maciak in their enthusiasm for the activity and its importance to them and to the school community.

School Committee student representative Ben Austin said several students had asked him to comment on the need for more club support at CRLS. “There has been a climate shift,” he said, with many more clubs starting. Students are also aware of the need to make sure all students have equal opportunity for clubs and trips, which requires subsidization. An increasing interest in community service has generated more need for resources, such as the food that Club Four serves, or supplies needed by Habitat for Humanity. The drama club that put on this month’s six performances of the musical “Footloose” found itself short on funds for set materials. Austin said many students also would like their teacher advisors to get higher stipends, which they said have not been adjusted in 20 years.

Special education resources. Karen Dobak, Pamela Blau and Julie Viens, representing the Parent Advisory Council on Special Education, requested funding for more comprehensive special education training for all teachers; for a curriculum that better integrates self-contained classrooms instruction into the mainstream curriculum; and the “acquisition of a system” that better manages social emotional learning. Viens asked that the district take a hard look at the contract for special education transportation, which she said accounts for 70 percent of the special education budget. The many hours some students spend on buses need to be treated as part of their school day, she said, charging that the current contractor, SP&R, is insufficiently monitored or made accountable for its role as “the ground zero of special education transportation disaster” with poorly trained staff. 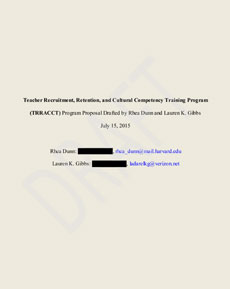 Diversity in hiring. Parent and Cambridge Public Schools alum Rhea Dunn resubmitted to the committee a draft proposal for a plan to recruit, hire and retain a more diverse faculty, which she calls Trracct. Dunn said that her entire time as a student, she had only one teacher of color. Today, her 18-year-old son has also had only one teacher of color. Her urge to get a stronger commitment from the district was echoed by Chase.

Tutoring Plus. Kathryn Fenneman, executive director of Tutoring Plus, which provides out-of-school tutoring free to students, asked for a doubling of its budget to $32,000. Submitting what she identified as program evaluation data from last year, Fenneman said the organization’s middle school program filled to capacity within one day this year, and had to cut back services to accommodate everyone. Tutoring Plus serves more than 200 students, she said.

Other issues mentioned were a request from high school students for more social workers; a call for junior kindergarten for all 4-year olds; and a wish for more specialists, especially for ensuring high third-grade reading levels, with committee member-elect Emily Dexter calling for a better teacher/student ratio.