Fewer red lights for No. 1 Bus commuters could be just a start for city’s street transit 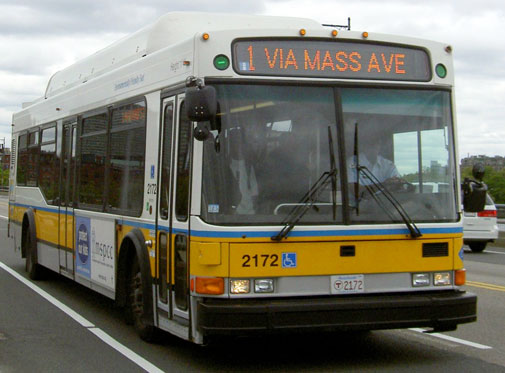 Fewer red lights for No. 1 Bus commuters could be just a start for city’s street transit

The No. 1 Bus is due for a faster trip next year for its 13,000-plus weekday ridership. (Photo: Dan4th Nicholas)

There’s one project residents can vote for in the city’s participatory budgeting process that will happen even if residents vote it down: a system that lets buses keep a traffic light green longer to get through an intersection, or get it to turn green earlier, shrinking how long is spent waiting at a red and the time commuters spend getting to work or back home.

The first route to get the system: The No. 1 Bus via Central Square – at 13,000-plus weekday riders, the fourth-most-used route in the entire regional system.

“The MBTA has indicated that their greatest interest is the No. 1 Bus because of heavy ridership, so I think that’s a good test case to get our feet wet and make sure we understand the issues and all the technology before we deploy it elsewhere,” Barr said at a Nov. 23 meeting of the City Council. “Certainly anywhere we have a lot of bus service and we have delays, and certainly Porter and Inman Square fall into that categories, would be somewhere not too far down the list.”

Like the No. 1 Bus route, Porter and Inman squares were identified by a priority study as having significant delay and reliability issues, and the city is coordinating with the state Department of Conservation and Recreation on a similar study of the likely next focuses for improvements, Mount Auburn Street and the Fresh Pond Parkway, according to a report from Barr.

City councillor Nadeem Mazen, whose Sept. 21 order prompted the report, said bus delays at problem intersections could also be eased by the introduction of “queue jump lanes” that let buses get past cars waiting at a traffic signal. Barr agreed the lanes could be “paired with TSP for more effective reduction in bus delays.”

Transponders are already installed in transit authority buses, but the city’s traffic lights need equipment installed so they can respond to bus driver requests. The cost of a Cambridge test is put at $250,000 in materials in the city’s second year letting citizens direct funding toward projects by popular vote.

“There is that option,” Barr said, referring to the citizens’ process. But if not enough voters consider it a priority for the $600,000 set aside for the year’s participatory budgeting priorities, “we will find the money somewhere in our signals capital budget.”

The technology is already in place in cities such as Portland, Ore. and Los Angeles, where it has “brought significant improvements in travel time for passengers, as well as increased schedule reliability,” according to the project’s participatory budgeting page.

Some residents say more efficient busing is just a small part of what needs to be done.

“It’s time for the city to discuss plans for an underground transit infrastructure and to create a centralized bus station that provides a clean, connected, efficient, sheltered and organized station for the thousands of people who use, and will use, the MBTA buses and subway,” she wrote for Cambridge Community Television’s Neighbor Media. “Such a plan would also free up parts of Massachusetts Avenue and surrounding streets for better and safer bike lanes and a much improved pedestrian experience.”