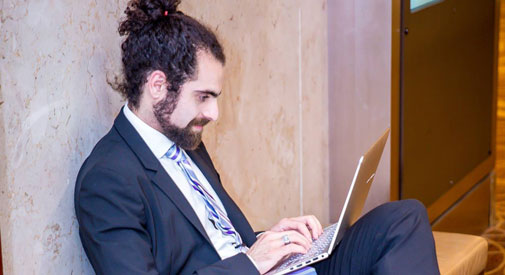 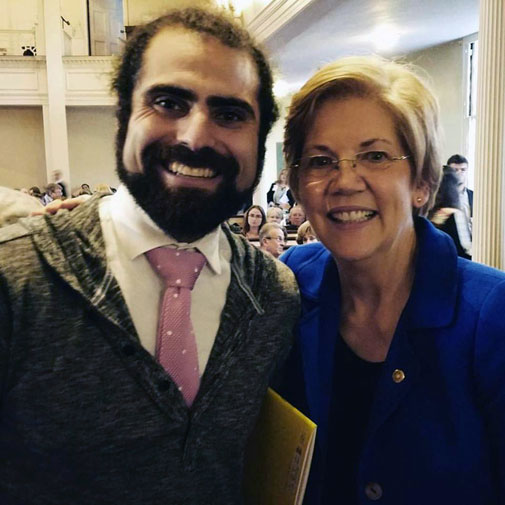 A conservative news site’s warning about city councillor Nadeem Mazen based on his religion seemed to backfire in Cambridge, as a stream of citizens stood during Monday’s meeting of the City Council to praise him and blast the website. It could go even further wrong, as Mazen said he is considering suing the site for libel.

“I’m weighing it,” Mazen said. “As dangerous as it is to feed the trolls … I’m very afraid of what it means to be defensive and bury the fact that hate speech is very much alive in 2015 in America.”

The 1,121-word article was posted Nov. 16 on Breitbart.com and appeared as a sponsored post in the Facebook newsfeeds of many residents, becoming buzzed about but lacking an official response until Monday, when city councillor Dennis Carlone – a longtime ally who ran with Mazen on a slate to win their first election in 2013 – brought forward an order condemning the article. Carlone’s order said the site had “a history of outrageous and sensationalized journalism designed for shock value but which has no proven basis in truth whatsoever” and the article was “anti-Muslim libel.”

It was a thread picked up during public comment by nearly a dozen citizens, who called the piece “ignorance and bigotry” and “bullying.” Resident Shelagh Foreman said that, “having lived here a long time, I’ve never seen an attack on one of our councillors because of their religion.”

The article by Ilya Feoktistov, director of research at Americans for Peace and Tolerance, and Sam Westrop, co-founder and director of the Institute for Middle Eastern Democracy, notes Mazen’s sweeping reelection Nov. 3 but suggests voters didn’t understand that he “has shown that he is not a representative voice of moderate Muslims and his Cambridge constituents” and are “now stuck with him for at least two more years.” It includes a maze of connections and affiliations to people or groups the authors say have extremist views; points to council votes the authors find controversial; and says Mazen has taken similarly controversial positions on issues of national and global importance.

In an email conversation, Feoktistov described the article as being about “whether a Cambridge city councillor is affiliated with Islamic extremism and terrorism.”

Even a close read of the article makes it hard to pin down the accusations.

A link referring to “Mazen’s willingness to speak out publicly against Israel” leads to a less-than-incendiary item from NECN at the time of an Israel-Gaza Strip air war and ground invasion last year, when Mazen described a blockade as turning Gaza into “an open-air prison” and said such things as:

“You have a situation where Israel is saying, ‘We want a ceasefire with no conditions,’ and Gazans are saying, rightfully so, ‘If we’re going to have a ceasefire, can we please have a normal economy, can our fishermen be returned to the sea, rather than being removed from their economic livelihood?’”

The article is also concerned that Mazen has “painted secular Muslims as traitors,” and aims to prove it with a subtitled video clip it says shows the “worst vitriol” coming from Mazen and the state chapter of Council on American Islamic Relations he founded. The clip, in which he discusses groups that “foist secular attitudes on Muslims” also seems to  underperform as an illustration of extreme vitriol:

“So, you know, that project exists, and to the extent that that and projects like it are being projected, imperialist-style on to our population, I think people are going to be very hesitant to follow anything like that.”

In terms of Cambridge politics, the Breitbart article criticizes Mazen for his opposition (including during votes) to the police department’s “increased militarization” even since the department helped hunt for and arrest Boston Marathon bomber Dzhokhar Tsarnaev – but in an era of Black Lives Matter protests, Mazen’s views are hardly radical or rare, and his stated concerns are essentially identical to those of councillor Craig Kelley, a former U.S. Marine.

When it comes to links with people or groups that set off alarm bells for Feoktistov and Westrop, many readers may again be underwhelmed.

The authors describe Mazen is a founding director of the state chapter of Council on American Islamic Relations, which it calls a “Hamas front group blacklisted by the FBI because of its terrorist connections.” When asked what that meant, Feoktistov said it meant the agency “disapproved” of the council, and he attached a copy of an April 2009 letter from Richard C. Powers, then assistant director of the Office of Congressional Affairs at FBI Headquarters, as background. In it, Powers says the council has a “demonstrated” relationship with a group called The Palestine Committee, which itself had a “demonstrated” relationship with the Palestinian group Hamas, which the federal government’s National Counterterrorism Center lists as a terrorist group for its violent approach to resolving a decades-old conflict with Israel.

“The FBI’s decision to suspend formal contacts was not intended to reflect a wholesale judgment of the organization and its entire membership.”

A May 5, 2015, letter to the council from U.S. Secretary of State John Kerry, presented by the council, affirmed that “the U.S. government clearly does not consider CAIR to be a terrorist organization.”

Mazen’s turn as president of the MIT Muslim Students Association was suspicious to the authors because the association was under the “aegis” of Suheil Laher, whom the authors say is a former Al Qaeda fundraiser. Mazen also is under a cloud of suspicion because a “colleague” invited a controversial preacher to speak at Harvard and because the Facebook page of an online calendar named MassMuslims, co-founded by Mazen, listed an event with a preacher who has called homosexuality a “disease” and “repugnant shameless sin.”

Mazen said he doesn’t control or moderate the page and had no knowledge of the event.

“Dozens of people have access to MassMuslims and can promote whatever’s going on locally. I don’t know this [preacher] from any other speaker,” Mazen said. “Can I imagine that some conservative religionist of any religion is homophobic? I can imagine that. Religions have homophobes, it’s a real thing. That being said … I was surprised to see them bring that up as something I would be affiliated with.”

Indeed, during a brief radio debate hosted by the WEMF radio show “The Young Jurks” on Nov. 28, Mazen tried to elicit from Westrop any examples of him being accused of personal homophobia or anti-Semitism, saying, “I can’t see a single thing in that article that seems to claim that I myself have done anything wrong.” Westrop said he had no such examples.

Jason Potteiger, a political aide, helped Mazen examine some of the allegations in the article, including following some of two-dozen-plus links within to assess the quality of their background material – and finding much of it just raised other questions and doubts.

“You know security through obscurity? They slander by obscurity. You can’t check every single thing they say,” Potteiger said. “You start chasing it down and all of them are misrepresentations or slightly twisted. But to the individual person it’s so difficult.”

Libel – being defamed in printed matter – relies on damage to reputation, and for a public official such as Mazen relies on a court finding that an author showed “actual malice” in publishing. That is, writers must know a story was wrong and have shown “reckless disregard” for whether it was true or false.

Despite the story’s numerous dramatic allegations, overall tone of accusation and repeated reference to terrorism, Mazen, Westrop and Feoktistov agree that the authors didn’t reach out for reaction or context ahead of publication. “I don’t exactly know what he believes,” Westrop said during the radio show, telling Mazen, “Why this conversation is so useful is that it’s a chance to hear what you think.”

“We decided not to reach out to Mazen for comment out of concerns that he might have mounted a preemptive threat to any publication we published in. We are well aware of CAIR’s attacks on freedom of the press and we were very concerned about preemptive attempts to violate our First Amendment rights through the courts. CAIR has successfully pressured publishers like Simon & Schuster, U.S. News & World Report, the Tallahassee Democrat and many others into not publishing or retracting materials CAIR didn’t like.”

“We’ve been told that Mazen plans to sue us for libel,” he said. “Apparently he hasn’t heard of New York Times v. Sullivan – another bad old Dixie attack on freedom of the press by a government official … We think that our concerns were well-justified and that the attack on our civil rights would have been even more damaging if Mazen had had the opportunity to get a head start on it prior to publication.”

Referring to Carlone’s order, which was adopted by unanimous vote of the council, Feoktistov said it “shamefully resolved that our constitutionally protected speech is ‘illegitimate.’ Can you think of any examples post-Jim Crow South where a governmental body in America has made such a full-frontal assault on the press?”

Mazen, though, is concerned that the Breitbart article has affected his reputation. That may not be an issue in Cambridge, where he said he’s been “lucky to have an incredibly progressive group of people who know me” and have countered some concerned or even inflamed responses on online message boards. But the article has a wider audience outside the city, some of whom have found his contact information online and used it, he said. “We got our first violent message the other day, someone who said something like ‘The Christians are coming for you, watch out.’”

“There’s probably hundreds of thousands of people who’ve seen this article [and] have shared it proactively in conservative circles, and my reputation has definitely been damaged there,” he said, although he felt the article hadn’t gotten much traction among other conservative media. “The worst I got before this article was when someone would have an anti-Muslim ideology but when they heard me speak and they’d speak against Islam, they’d say, ‘Oh, but you’re one of the good ones.’ And that’s offensive in a different way. Now the worst I get is actually ‘No, we believe you’re a radical’ … it’s impossible to know how far that reaches.”

Neither the response by citizens and council nor the potential for a libel suit had Feoktistov second-guessing his article. He said:

“The article’s purpose, which it achieved beyond our hopes, was to expose the truth, even if some people would rather not hear it or try to suppress it altogether. The Cambridge City Council action was a nice bonus, because it has now exposed the truth about a certain contempt for civil rights that comes with the package of a far-left, single-party government. We write for a large national audience and we take the long view, so I can confidently say that Mazen’s cronies on the council did not do him or themselves any favors. The more attention they attract to their extremism and contempt for civil society, the worse it is for them. Most Americans will see that.”

Carlone’s order acknowledges that “a free press and an informed public are essential for a well-functioning democracy” but suggests media outlets such as Breitbart can “mislead, unfairly portray and smear the honorable work of individuals in an attempt to build readership and sell subscriptions.”

“It is important that we as a community publicly condemn these organizations who blatantly fabricate the truth,” Carlone said.