‘Youth’: Caine and Keitel get philosophical in larger-than-life spectacle by Sorrentino 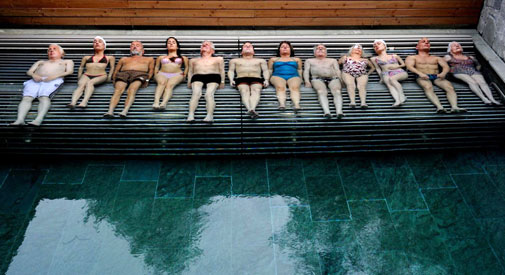 ‘Youth’: Caine and Keitel get philosophical in larger-than-life spectacle by Sorrentino

Music more than anything plays a significant role in Pablo Sorrentino’s “Youth.” Sorrentino, possessor of a keen understanding of how the right song can elevate a scene, uses indie rock songs from groups such as Sun Kill Moon and Godspeed You! Black Emperor with a sweeping score composed by David Lang, putting music at the heart of the film and showcasing how two art forms can be merged to create a film that otherwise might not have been as evocative. 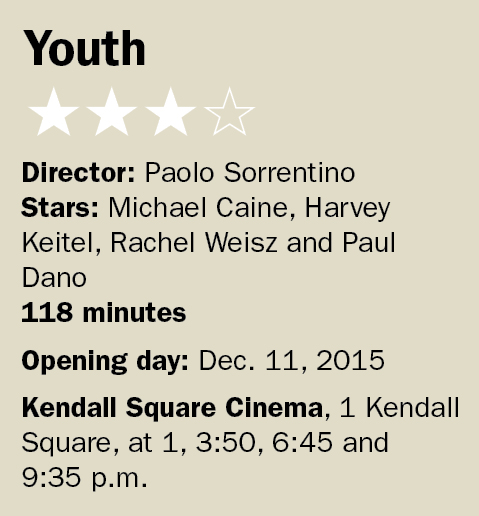 Michael Caine and Harvey Keitel star as lifelong friends Fred and Mick, vacationing in a spa in the Swiss Alps. The film embraces the countryside with sweeping shots of green pastures, where Fred sits and conducts his imaginary composition, or where Mick and his band of screenwriters lay under the stars, trying to complete his next screenplay – his opus. Fred is a retired orchestra conductor, even refusing a request from Queen Elizabeth II to perform at Prince Phillip’s birthday his most popular piece of music, “Simple Songs,” due to the fact his wife can no longer sing the solo. Mick, meanwhile, refuses to back off of what he loves, doing everything in his might to finish his screenplay and be able to direct his next film. Both have had illustrious careers and children who love them. It’s hard to understand how there could be any unhappiness in their lives when, to us, they’ve achieved it all.

If it had been a simple two-hander between powerhouses Caine and Keitel, it would have been riveting. But the film has the luxury of supporting players Jane Fonda, Paul Dano and Rachel Weisz, all marvelous. Caine is the standout, delivering one of his most nuanced and powerful performances in years as a man who feels in his body it’s time to let go of the past while his mind stays curious, always reaching for his next moment of expression. A deeply internal man, Fred doesn’t believe in emotions, while Mick believes they’re everything. The two share a friendship of happy moments, of only ever sharing the good.

The film dissects the notion of aging with little subtlety, but in a film that is all about grandiose notions of love and life, regret and opportunity, the larger-than-life spectacle is fitting. Plenty will call this film hollow, an extravagant, beautiful portrait with nothing to say, but the depth of the film isn’t in Sorrentino’s script, but in the way he shoots his story. Take the shots of the young masseuse who dances in her room as an expression of joy, or the way Sorrentino tightens the frame on Fred’s daughter (Weisz) as she lays into him about all the times he wasn’t there for her or her mother in their lives, capturing every muscle in her face so we see the pent-up anger. These are deliberate choices in a film that show us only brief outbursts of emotion. There is no question “Youth” is over the top, but that’s what makes it so thrilling to watch – an intimate story broadcast on an extravagant stage, where every emotion is given an appropriate backdrop. What is bigger to an individual than what they’re feeling that moment?

We are Dano’s character in this film, the actor who observes everyone around him and their emotional cues. The film is purposefully an orchestrated production, which is why music is so integral, with each song coming in on an emotional cue, whether it be Mick’s loneliness, Fred’s bottled-up grief or the pair’s want for something more, something artistically filling. Sorrentino shoots with an understanding of character and an understanding of what makes a story so all-encompassing.