‘The Force Awakens’: Saga’s no Solo affair, but this time familiarity breeds excitement 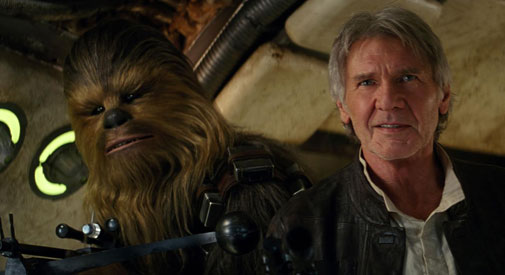 ‘The Force Awakens’: Saga’s no Solo affair, but this time familiarity breeds excitement

The resurrection of the cherished franchise that defined blockbuster and captured the imagination of generations owes much to Michael J. Fox – tags more apt than “The Force Awakens” could be “Family Ties” or “Back to the Future.” It’s a game go by J.J. Abrams, who rebooted the “Star Trek” franchise with aplomb, and here systematically atones for the missteps creator George Lucas made with his prequel trilogy. Gone are the mass millions of digitized droid warriors and CGI-rendered spectacles such as Jar Jar Binks. Thanks to some tireless plot weaving by Abrams and cowriters Lawrence Kasdan (who penned the best of all the “Star Wars” to date, “The Empire Strikes Back”) and Michael Arndt (“Little Miss Sunshine”), the old-school magic and wonderment is back in the galaxy, because they’ve worked in Han Solo (a refreshed Harrison Ford) and Princess Leia (Carrie Fisher), now General Leia. Even the notion of Luke Skywalker floats out there, but all that comes in pieces carefully littered throughout, and pleasingly so. 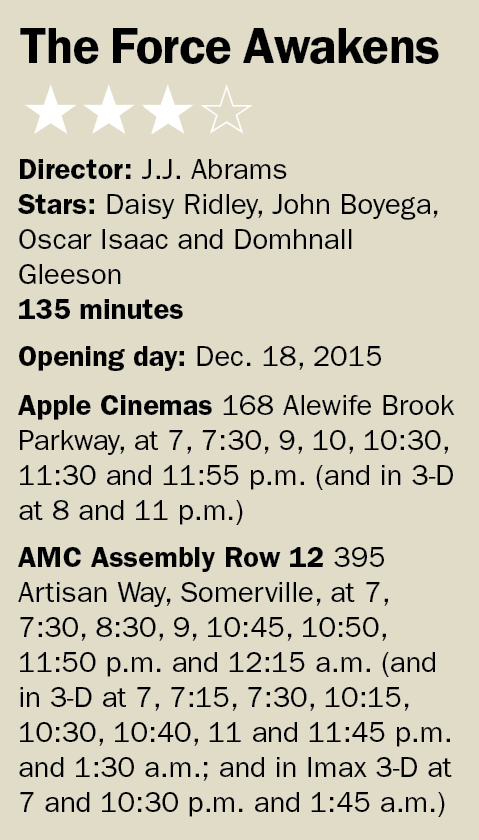 Like the first theatrically released chapter back in 1977, we begin on a dusty, barren planet – this one called Jakku, and more junkyard than outpost. Time-wise we’re about 30 years out from “Return of the Jedi,” and a Resistance fighter (Oscar Isaac, showing some comic flair) and his beeping beach ball of a droid (the adorable BB-8, who’s been getting all the prerelease press) possess a secret hologram map to deliver to Resistance HQ. The info will allegedly guide the holder to Skywalker so the object of the title can be achieved and the Evil Empire – now known as the First Order – can be weakened and its tyrannical chains cast off. But before any of that happens Jakku is assailed by Imperial Stormtroopers, and BB-8 and the map fall in with a scrappy scavenger named Rey (Daisy Ridley, showing the resolve of Katniss Everdeen) who’s pretty good at hand-to-hand and has a mysterious childhood that spills back to her in ghostly shards.

Darth Vader may be gone, but in his stead looms Kylo Ren (Adam Driver from “Girls”), a protégé donning the latest in black mask fashion and in the servitude of a Supreme Leader who looks something like Gollum on steroids – which is fitting, as he is played by Andy Serkis, who played the ring-seeking creature in “The Lord of the Rings” trilogy.  Bloodlines (Han and Leia have done more than send holograms back and forth across the universe) and old alliances weigh heavy, and the First Order has the latest in weapons of mass destruction – something that makes the Death Star look like a popgun. In all this, Rey and BB-8 and a stormtrooper with a crisis of conscience named Finn (John Boyega), formerly known by the trooper handle FN-2187, and set off in the Millennium Falcon to get BB-8 to its destination. You can only imagine how the rightful owners of the Falcon feel when they track down their old ship, and it’s a triumphant moment when Ford’s Solo, replete with his big, sturdy old Chewbacca, strides in. And not a moment too soon; his snarky comments and lightness in the face of imminent peril were sorrily missing in Lucas’ second (or is it the first?) trilogy, and they’re what kick life into the galactic adventure here.

Clearly the reins of the new series are being handed over to Rey and Finn. The can-do Rey is a well-sketched and finely performed part, but Finn is much more thin, tenuous and at times dreadfully passive. It doesn’t help that for much of the first part of the film he gets glorious clichés such as “Let’s do this,” to deepen his character.

Dialogue aside, Abrams gets the most out of his performers. No competent actor registers wooden and inert like they were in the first three chapters – sorry, Samuel L. Jackson, Academy Award-winner Natalie Portman and Liam Neeson. In “Force” too we get a smack of Yoda in Maz Kanata (voiced by Lupita Nyong’o), who doesn’t mangle grammatical syntax with poetic irreverence, but does manage a bar full of motley aliens imbibing merrily to a band playing a strange brew of mashed-up reggae.