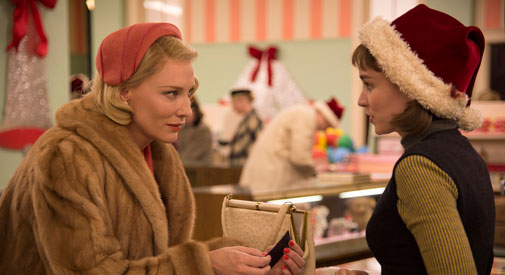 There is no other story this year that has two characters whose romance is so instantly alluring – taking just a smile or a single, lingering hand on the shoulder to so deeply draw us in – as Todd Haynes’ “Carol.” 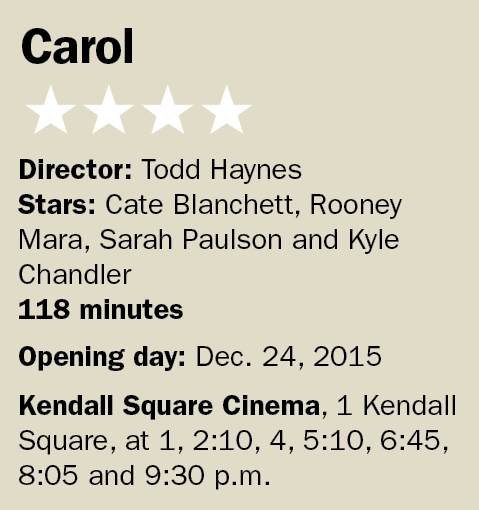 Adapted by Phyllis Nagy from Patricia Highsmith’s book “The Price of Salt,” the film, set in 1952, tells the story of two women and their burgeoning relationship. The secrecy involved with their romance strains the two, as the husband Carol is divorcing (played wonderfully by the always great Kyle Chandler) threatens to take away visitation rights with their daughter. Despite this, she and shopgirl Therese continue to fall for one another, and they must decide what means the most in their lives, what they’re willing to fight for and if there’s anything they’re willing to lose.

Like this year’s equally terrific “Brooklyn,” the film has no qualms about using as much as possible. The reds and the greens are out in full force (red in particular key for Therese in her Santa hat first catching Carol’s eye), allowing the costuming to tell a story along with the script, in subtler, unspoken ways. With Carol’s elegant posturing, nails done to perfection and painted-on lips, and Therese’s coiffed hair and natural look, there’s an underlying storytelling going on through appearances alone. Therese adopts a doll-like appearance, with Rooney Mara’s high cheekbones and demure physicality standing out next to Cate Blanchett’s elongated form and cheshire grin. They make for a dynamic pair not just with their chemistry, but with their physical differences.

It’s a luminous film, a faded old photograph that’s come to life, rapturous in its framing by cinematographer Edward Lachman and in its set design. Light filters through windows as wisps, and the winter appears so brisk we can feel the cold. The lounge restaurants are smoky, and the hotel rooms lush and comfortable. The design is stunning, bringing us back into the 1950s with an effortless lurch, and Carter Burwell’s score adds to the intoxication.

The film goes nowhere without its stars, though, and Mara and Blanchett give two of the finest performances of 2015. Understated but warm, the film is given its soul through their chemistry, and it takes just a look. Blanchett is as great as ever, ending the year on a high note after starting strong in Disney’s “Cinderella,” and Mara positively shines as a girl so filled with passion she could burst, lighting up any time Carol gives her a prolonged smile. Few moments have been as moving as any time Mara gazes at Carol while she has her head turned, passionate and fiery, a stark juxtaposition to the quiet young woman she plays.

At nearly two hours, “Carol” never feels its length – an entire film of the two characters in Carol’s car, talking about their lives and interest, would have been as riveting. Haynes has taken a very simple story on paper (aside from the politics of the time, but that’s been done) and made it into something universally captivating. He understands what makes a good, evocative romance, what makes an audience feel the emotions the characters are dealing with and working through. We all want to be swept off our feet, and Carol allows us to feel the stirring, head-in-the-clouds emotion Therese experiences the first time she lays eyes on Carol.