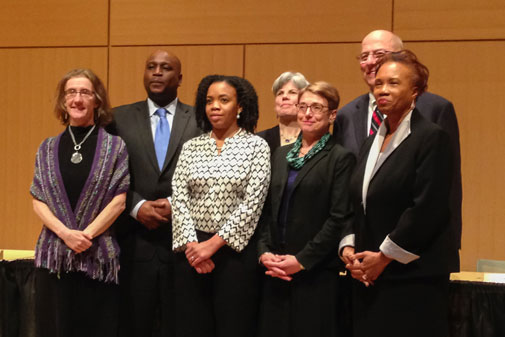 The new School Committee was sworn in Monday evening and, with the swift election of E. Denise Simmons as mayor at that morning’s City Council inaugural meeting, made Cambridge history in having five of its seven members being women.

Newly elected members Manikka Bowman and Emily Dexter join incumbents Kathleen Kelly and Patty Nolan, with Simmons serving as chairwoman of the committee in her role as mayor. Long-time incumbents Richard Harding and Fred Fantini round out the membership. Only the committees elected in 1997 and 1999 had as many female members, but the mayors were men – Francis H. Duehay and Anthony Galluccio, respectively, according to unofficial Cambridge political historian Robert Winters.

The committee and event represented diversity in another way as well: Bowman, Harding and Simmons are black, as were three speakers helping usher in the term.

The Revs. Lorraine Thornhill and Cheryl Harris provided an opening invocation and blessing for the event. Fletcher Maynard Academy Principal Robin Harris, herself a former School Committee member, was the inauguration speaker.

After being sworn in, the 2016-17 committee opened a brief official meeting to re-elect Fantini as vice chairman; it will be his third consecutive term in the role. Fantini is serving his 17th term on the committee overall. Nolan initiated nominations by putting forth Fantini’s name. Dexter nominated the remaining incumbents – Nolan, Kelly and Harding. The first round of voting had Bowman voting “present,” Nolan and Dexter voting for Nolan and the remaining four voting for Fantini. Nolan, Dexter, and Bowman changed their votes to Fantini to result in unanimous support.

Along with the vote for Fantini, committee student representatives Griffin Andres and Ben Austin, Cambridge Rindge and Latin High School seniors, provided gender balance as joint emcees of the event. Several other high school students had roles, including as leaders of the Pledge of Allegiance, a multi-language salute to the flag, national anthem vocalist, chamber musicians and ushers. The evening also included two musical selections from the Peabody School’s Early Bird Singers, directed by music teacher Kathryn Bach.

The inauguration was a family affair for the members, with each accompanied by children, spouses, parents or nephews during their swearing in. Several other family and friends were pointed out during the brief official meeting once members were seated at the dais, and together with callouts to officials from Cambridge and Boston government, the Cambridge Main Library lecture hall had an air of warm community support for the new group.

Speaker Harris used the Star Wars movie “The Force Awakens” as an analogy in her speech urging the new committee to come together to fight the forces threatening to “separate us as a community.” The ragtag band of rebels, she said, are an allegory “that reflect the challenges that we face every day … and our relationship to our increasing[ly] technological world and deciding what is right and wrong for our society.”

Referring to societal issues of “inequality, fear, violence,” as well as school-specific strains of state and federal education requirements and the No Child Left Behind “aftermath” and “confusion,” Harris urged the committee to work together to rise above smaller issues and personal agendas and focus on the broader issue guaranteeing “high achievement for every single student in the Cambridge Public Schools.”

“Face the most urgent problems with courage and discipline. Awaken that hero within you, let us embrace the struggle to fly. Let the force be with you,” she charged the committee.