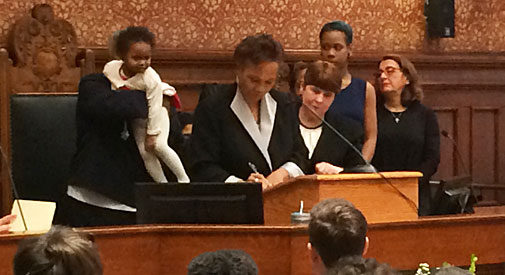 Calls for council unity are heard with choice of Simmons, McGovern
By Marc Levy 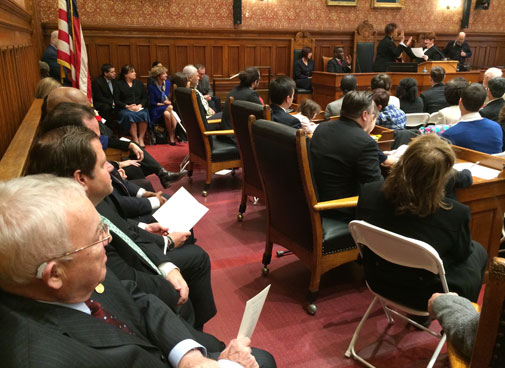 E. Denise Simmons is sworn in Monday at the City Council’s inaugural meeting, watched by former mayors and officials of Cambridge. Simmons is the city’s newest mayor; at left is Francis H. Duehay, whose first mayoral term was in 1980. (Photo: Marc Levy)

Jan Devereux was sworn in for her first term in office.

Simmons was the immediate unanimous choice among the nine councillors, while there was briefly contention for the seat of vice mayor. At first, second-term councillor and biggest winner of No. 1 votes in the November election Nadeem Mazen was suggested for the seat by Dennis Carlone, Devereux and Mazen himself. With McGovern holding six votes already, Mazen led the end of his own challenge, with Devereux and then Carlone following.

“Side by side as partners”

“We had a very [strenuous] election process, but … this vote shows that we are all committed to speaking with one voice to the degree that we can, because we are here for one purpose and one purpose alone, and that’s to serve the citizens of Cambridge,” Simmons said in her acceptance speech. “I look forward to doing that with you and for you, not so much as a leader but sort of side by side as partners. We also know that when we as city councillors don’t get along, it’s only the citizens that suffer.”

The council election was expensive (with $651,663 in spending by candidates, up 22 percent from two years ago) and contentious, reflecting the divisions of the previous term with Carlone and Mazen as outliers. While Mazen had his own “Slate for Cambridge” with first-time candidates and Carlone formed a sort of informal slate with Devereux and challenger Mike Connolly, the rest of the incumbents ran together as a “Unity Slate,” seeking votes with assurances of productive cooperation in the coming term. Dennis Benzan, counted out during the proportional representation voting process, is exploring a run for the state Senate.

Politics watchers in the city identified Simmons months ago as the likely next mayor, at least at the announcement of the Unity Slate. The roots of her easy election likely trace back to the inaugural meeting of the previous term, as councillors went through three twisty ballots toward electing David Maher, and Simmons had to remove herself twice from the voting in machinations Benzan criticized at the time as “gamesmanship.”

“While I hope to be mayor again, I also recognize that there is important city business to be taken care of. In the past terms, the vote for mayor has gone for days and then weeks and then months, and that does not serve the city well,” Simmons said at the time.

The previous two terms saw mayoral elections that took up to 10 ballots and lasted well into February, delaying the appointing of committee leaders and therefore the work of the committees, where details of more complex or controversial ordinances are hammered out before being heard by the full council.

Past, present and future

McGovern said the council had a lot of work to do, citing residents who struggled to pay their rent and put food on the table. “We really have to come together as a community. We’ll have some disagreements, but those disagreements are born out of a deep commitment and love for this community,” he said. “I think that’s important for all of us to remember.”

In addition to overseeing the bulk of a three-year citywide development master plan process with her two-year term, Simmons said she was focused on issues of housing, development, jobs, fair wages, “resiliency” and fairness for all. Simmons drew national attention as the nation’s first black, openly lesbian mayor upon taking office in 2008, and during her term she was faced with Cambridge’s most glaring, awkward moment in the international spotlight: The arrest of Harvard professor Henry Louis “Skip” Gates at his own home.

The council’s Sullivan Chamber at City Hall was crowded with residents, councillors and their ushers and former city officials, including Francis H. Duehay, a three-time mayor in the 1980s and 1990s; Michael A. Sullivan, a mayor for two terms in 2002-05; Kenneth Reeves, a two-term mayor in the mid-1990s and 2000s; Anthony Galluccio, mayor for two terms in the early 2000s, Henrietta Davis, who was mayor two terms ago; and former councillors Kathy Born, Marjorie Decker and Sam Seidel. 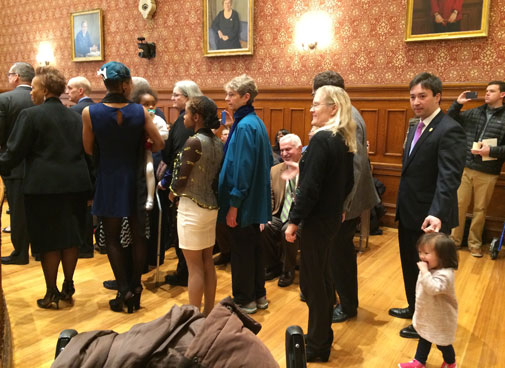 The roughly hourlong ceremony held a smattering of personal moments, many resulting from the introduction of family and especially children who served as ushers for the councillors, and even laughs, including city clerk Donna Lopez initially forgetting to introduce Tim Toomey, the council’s longest-serving member. When he cleared his throat, Lopez smoothly returned to her introductions with the phrase “last but not least …”

Simmons’ slip during her mayoral speech – she said the city had been through “a very extraneous election process” – passed without comment.

Cambridge police Lt. Pauline Wells, who moonlights as a singer of traditional Irish music, sang the national anthem early in the meeting and John Lennon’s “Imagine” toward the end, drawing a standing ovation. The meeting’s opening prayer was given by Bishop Brian C. Greene, senior pastor at the city’s Pentecostal Tabernacle, and the benediction was given by Nancy A. Khalil, a Harvard doctoral candidate and member of the Islamic Society of Boston – a signal of Cambridge’s diversity after articles targeting Mazen have appeared on a conservative media website.

Companions on a journey

Khalil’s benediction called for peace and progress among councillors as well, saying, “Leadership is not a privilege and it’s not an accomplishment. It’s a responsibility, and it’s a trust. In our city, leadership is also a team.”

Councillors were like companions on a journey, she said, in words that resonated with Devereux, the sole first-termer on the council.

“Some of the discussions we had leading up to our unanimous choice of a mayor helped me understand what it means to be a companion on the journey,” Devereux said, and she said her goals were the same as Simmons’ for the upcoming term.

“I got to see my little locker back there with my name on it,” she said. “It doesn’t take much to please me.”