‘45 Years’: Joined by a third at anniversary, frozen in time and making things chillier 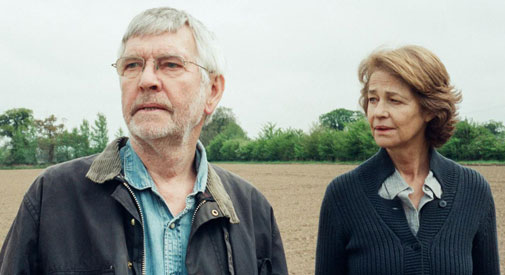 ‘45 Years’: Joined by a third at anniversary, frozen in time and making things chillier

Led by two powerhouse performances from Charlotte Rampling (as Kate) and Tom Courtenay (as Geoff), Andrew Haigh’s introspective relationship drama “45 Years” takes a tough look at marriage, aging and all the years that fall in between. 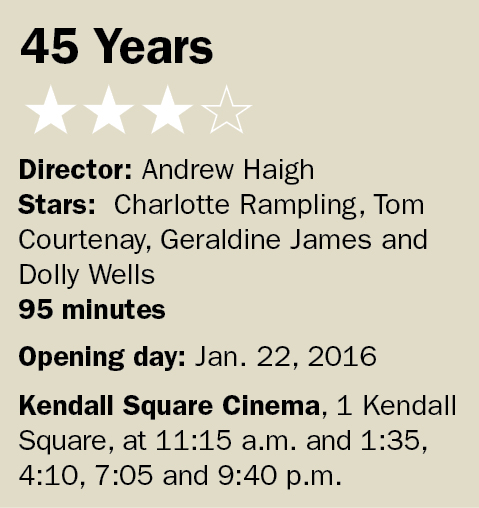 While planning their 45-year anniversary celebration, the couple gets news that Geoff’s former girlfriend, who died decades earlier, has been found frozen and appearing the same as when Geoff first loved her. Kate now must deal with her doubts about Geoff’s old feelings bubbling to the surface, and wonders how well she has really known her husband all these years. Reflecting early in the film that there are no pictures around the house (they never had kids), you can’t help but wonder if she’s asking how much value their life together has held. Recently nominated for an Oscar for her subtly monumental performance, Rampling is astounding as Kate and breaks your heart effortlessly.

“45 Years,” to its detriment and success, is a very quiet film. The story often meanders in its thought and gets lost in the furrows of Rampling’s sorrowful eyes, presenting very little to engage with on the surface. On the other hand, this silence and more (more importantly) stillness helps us see the immense pain and discontent the characters experience. “45 Years” isn’t a boring film, but its pace is determined and more than content to linger on slow-burning emotion.

The greatest grievance is largely that the film pales in comparison with Haigh’s debut feature, “Weekend,” which nailed the connection between two strangers, imbuing a startling warmth that is missing between characters in “45 Years” who have been married for decades. It shows the gulf between husband and wife, but it turns what could be a chilly but loving relationship into one that feels clinical.

The notable exception is one magnetic scene in which the two are at their happiest and most carefree as they drink and dance in the living room, totally and completely satisfied with one another and happy there is nowhere else they would rather be. There are stunning moments scattered through the film, though – one in particular involving Rampling, a projector and a whole lot of history, where the pictures she’s watching are framed in such beautiful contrast with her face, emphasizing her sudden isolation. The camera ignores the cluttered attic and focuses on just the pictures, Rampling and the sound of her clicking the projector button, suffocating us with feelings of shock and betrayal as she realizes the secrets her husband has never told her.

These singular, powerful moments extend themselves to something that’s become expected in Haigh’s work: a frank look at sex, with this film showing it between an elderly couple – something we don’t often see in film unless as the butt of a joke. In this case it’s loving, humorous and honest, making sure we’re right over their shoulder at their best moments and worst.

Shot in a manner that never gives us the characters’ full emotional bearing, there’s a sense of unease and tension from the moment Kate and Geoff learn about his old lover that lingers until the film’s closing moments, which is not something you’d expect to see in a film about a couple’s anniversary. Poetic and moving in its direction and performances despite being sometimes stilted in its dialogue, “45 Years” is a beautiful little film.