Changes to clogged, crash-prone roadways in West Cambridge get funding for study 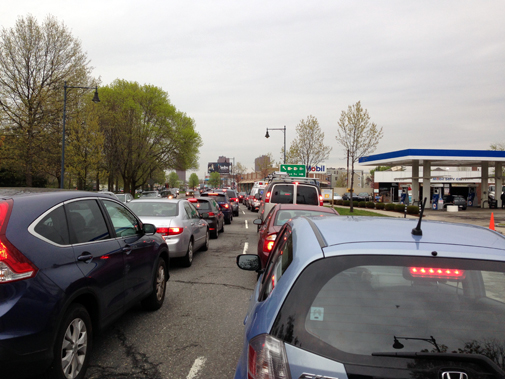 Changes to clogged, crash-prone roadways in West Cambridge get funding for study

Traffic around Mount Auburn Street and Fresh Pond Parkway is getting a state-funded look in the coming year. (Photo: Fresh Pond Residents Alliance)

The intersections around Mount Auburn Street and Fresh Pond Parkway, one of Cambridge’s most troublesome patches of road, is headed for reconfiguration for more safety and less clogged traffic. A plan, paid for with a $390,038 study announced Friday, is expected within a year, according to the city’s legislative delegation.

“The intersections date back to an earlier era when traffic volumes were much lighter, and no longer work in their current configuration,” said state Sens. Patricia Jehlen and William Brownsberger and state Reps. David Rogers and Jonathan Hecht in a press release. “Thousands of people every day – bus riders and drivers – suffer through delays in these intersections.”

Cars wait in traffic as much as a half-mile away from the West Cambridge intersections near the Charles River, one study says.

Danger as well as delay

More urgently, the interaction of some 34,000 vehicles a day brings a high number of crashes. At Mount Auburn and Fresh Pond Parkway, where it can take as much as seven seconds for a car to clear the intersection, 27 crashes were recorded from 2010-12, including seven with injuries and one fatality, according to a study referred to by the delegation. At Brattle and Aberdeen streets, there were another 28 in the same period, resulting in 11 injuries, and the area hosts two private day schools: Buckingham Browne & Nichols and Shady Hill.

Pedestrians and cyclists are also at risk for injury or delay; when utility work in 2014 closed a lane of traffic, it took buses traveling routes 71 and 73 as much as seven minutes just to cross the intersection, Brownsberger said, slowing the commute of some 12,000 riders daily.

The fixes for the area could include such immediate steps as adjusting how long lights stay green and giving buses green-light priority; midterm steps such as converting vehicle travel lanes to bus and bike use only; and longer-term changes such as creating two separate intersections along Fresh Pond Parkway or Mount Auburn. Putting the street on a “4-to-3 road diet” would leave one lane for traffic in each direction, put a turn lane between them and use the remaining space on each side for pedestrian and bicycle passageways.

The area could see the addition of two small parks to improve the pedestrian experience. The smaller would be installed at the end of Brattle Street to “create calmer, more predictable traffic movements while highlighting the Mount Auburn Cemetery and the entrance to Brattle Street, a gateway to the Old Cambridge Historic District”; a half-acre park is envisioned near the Star Market.

While not certain to be implemented, the ideas come the Boston firm Howard Stein Hudson, winner of the state contract.

“The consulting team has done good job of initial brainstorming, and we can hope that their final recommendations will make a real difference,” the legislators said.

The delegation has been working on the issue for nearly two years, convening an April 2014 meeting with engineers from the state Department of Conservation and Recreation, which controls the roadways there, as well as from the Massachusetts Bay Transit Authority and Cambridge. The towns of Belmont and Watertown sent representatives.

“There was a sense of excitement in the room,” Brownsberger said. “It became clear that no one has really studied the intersection in many years.”