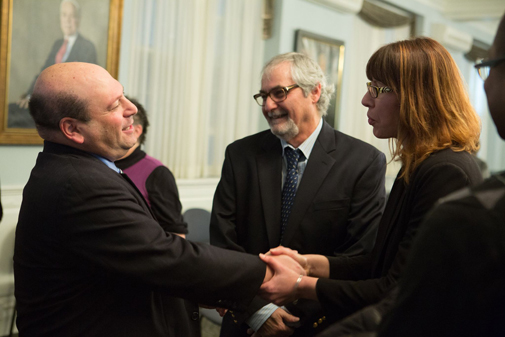 Lesley University got a new president Wednesday: Jeff A. Weiss, of the consulting firm Alliance Practice and Healthcare Group of Vantage Partners.

The board of trustees named Weiss after a unanimous vote this month following a national search led by a 16-member committee made up of trustees, faculty, staff and administration. He will succeed Dr. Joseph B. Moore as president July 1. Moore is retiring after nine years in office.

Moore announced his retirement in May, just as the 107-year-old university had opened the $46 million Lunder Arts Center in Porter Square, consolidating its Boston arts program into its Cambridge campuses. Doctoral and master’s programs, expanded hybrid education and online learning programs were also added during Moore’s time.

“What’s most critical is how we take the strengths of what we have been doing for years and build upon them,” Weiss said. “Higher education is facing a slew of challenges … we have access challenges, we have affordability challenges. We have challenges even as people perceive and question the relevance of a liberal arts education and even a specialized education. I think the beauty of Lesley is that we are in the business of being creative and innovative around education.”

“This will be a new journey together. I am a believer in working with others to create what that vision is,” he said.

Trustees chairwoman Deborah Schwartz Raizes said the board was delighted to welcome Weiss as person with “a deep respect for Lesley’s mission and values which, when combined with his extensive experience empowering leaders and navigating complex organizations, positions him perfectly to build on our strong foundation and set a strategic direction for our next 100 years.”

Weiss holds a degree in government from Dartmouth College and a Juris Doctor from Harvard Law School. He is married to Gerri B. Weiss, a nurse practitioner, and is the father of two adult sons, Samuel and Alec.

He’s been a longtime member of the adjunct faculty at the Tuck School of Business at Dartmouth in the MBA and Master of Health Care Delivery Science programs. He also serves on the faculty at the United States Military Academy and is a co-founder and co-director of the West Point Negotiation Project; before founding Vantage, he partnered in consultancies focused on international negotiations, mediations and training with both nonprofit and for-profit models.

As president of Lesley, he will oversee the education of more than 7,000 people a year pursuing undergraduate and graduate programs in education, the arts, human services and the environment at its Cambridge campuses, online and in a number of states.

“Lesley possesses enormous strengths, from its faculty, administrators and staff to its students and alumni, from its schools and centers to its programs in local communities and around the world. I am honored and humbled to be joining the university,” Weiss said.

“Close to 30 years of work on complex negotiations between and within organizations has taught me the critical importance of listening, building understanding, leveraging difference, joint problem-solving, creative thinking and clear communication. These are skills which I expect I will draw upon daily as I work with colleagues and students across Lesley, our alumni, in the community and with our partners,” he said.

In a January interview with student Christopher Anderson in the Lesley Public Post, Moore offered advice to whoever would follow him into the president’s seat:

“The communication piece is really critical here at Lesley. People want to know as much as possible about what’s being thought, what’s being planned and what’s going on. I don’t mean just from the president, but throughout the university people generally want to know what’s cooking. I think if my successor has that inclination, gets the support of colleagues to do that, and get other colleagues to do it as well, then the odds of Lesley’s success goes up.”